Latest News
Thoughts after watching magical kick: What Jonathan Garibay was thinking … perseverance … poor Longhorns … letting Pirate go … what is elite?What I learned about cats: Feline visitors left me knowing more about feral, stray, pet cats … things everyone should knowBrad Ralston’s building Red Feather Golf & Social Club in south Lubbock. It’s private, expensive … but you can bring your flip-flopsTiming is perfect for Texas Tech to stand on its own in Big 12, Texas and the worldBig 12 crisis should prod Lubbock to stake new future by looking West

A bunch of random thoughts the day after:

‘We’ve got to throw the spear’

After Iowa State’s field goal tied the game with a minute to go Saturday night, the New Mexican said she needed to go to the bathroom. As we all know, TV timeouts can run 15 days, so we headed for the women’s facility and I told her I’d be in the nearby open area in the stadium’s northwest corner  below the visiting Cyclone fans.

It had been, as someone I know used to say, a “flustrating” second half. Tech’s 31-14 lead was gone as Iowa State scored on its last four possessions and the Red Raiders were competing against a Big 12 opponent and the officiating crew. Visions of the Kansas State game were doing a number on my hopeful thoughts. I wasn’t excited about looming overtime considering what both offenses had done in the second half.

‘Maybe we’ll have some McGuire magic’

Then, for some reason, I told the New Mexican “Maybe we’ll have some McGuire magic.”

Yes, new head coach Joey McGuire has not taken over the team yet, but his personality has made a great first impression. He jacked up the crowd at halftime of the opening men’s basketball game Tuesday night we attended where he told the crowd his dog was from Lubbock and he just had to bring him home. It’s not just Joey. His daughter posted  a photo of her mom Deb with two shopping carts full of stuff and wrote: “Moving my parents into college from the same Walmart they moved  me in back in 2014 … they grow up so fast!”

The TV timeout only lasted 9 days and The New Mexican joined me as we watched former Frenship Tiger Donovan Smith move the Red Raiders  to Iowa State’s 44-yard-line with three seconds left. Jonathan Garibay came out to attempt a field goal toward the goal posts on the north end. I watched holder Austin McNamara kneel down at the Texas Tech 48 and said: “62 yards and what happened to the wind?” which had been blowing steadily out of the southwest and could have helped the kick.

I had no idea if Garibay made the kick it would tie for the second longest in Big 12 history.

I had no idea Interim Head Coach Sonny Cumbie asked Special Teams Coach Mark Tommerdahl, “What are the chances on this thing?” Tommerdahl said less than 50 percent,  but added, “But we’ve got to throw the spear.”

I had no idea if this was possible.

After the ball left Garibay’s foot and reached its apex, I felt it had the distance. But was it accurate?

The dudes in striped shirts under the goal lifted their arms straight up. Good. Final score 41-38 and Tech was bowl eligible. The Red Raiders started a frenzied celebration, joined by fans who rushed the field to celebrate.

At least for one night the magic was back at The Jones.

I loved  how after the game, Garibay quoted Romans 8:31:

‘If God is with me who can stand against?’

“I literally thought to myself ‘If God is with me who can stand against?’ So, I told that to Coach Tommerdahl … God is the reason I’m here. When I’m out taking my steps I’m just like, hit a clean ball and then everything else will take care of itself.”

Garibay gives Tommerdahl what he thinks his range will be during warmups so they can work that into plans.

“Going toward the scoreboard, the Jumbotron, the wind was kind of blowing a little bit, so I told them 55 and if needed, longer. I think I hit a 64 during warm-ups just to kind of get a feel for it, how I need to hit a ball to make it go that far. When there’s one minute left on the clock I’m warming up, getting my mind ready, whatever is needed I just told Tommerdahl just put me in there,” he said.

The senior kicker from California then talked a bit about what he called “kicking analytics.”

“So, when you get to a distance that far, it’s really hard to give it that nice height, you kind of have to drive it, and I looked the flags at the top of the uprights and I’m like the wind’s not blowing, I don’t have to try to kill this ball, I just have to hit a clean ball and hopefully it goes all the way. I didn’t know until the guys at the back were like ‘AAHH’. The thing is that my O-line stands up and I’m six feet tall I can’t even see … It was crazy.”

It was crazy … and magical.

And yes, there’s a lot of excitement about Coach McGuire … but let’s make sure to give credit to what Sonny Cumbie has done.

Not every call that didn’t go Tech’s way Saturday was wrong. But the high majority sure seemed wrong. A friend of mine who sits near the southwest corner of the end zone said he thought the interception to stop a Cyclone drive on the goal line was a clean catch. Overturned.

In the end, it didn’t matter, but let’s hope that crew never does another Tech game.

Speaking of Biblical quotes, my favorite is James 1, which says bad stuff’s going to happen. What’s important is how you deal with it, which develops perseverance.

America is somewhat infected by a victim mentality too many wear like a cloak of despair. It’s exacerbated by social media. Life would be great if only …

“I turn on the tube and what do I see

They point their crooked little fingers at everybody else

Spend all their time feelin’ sorry for themselves

Your momma’s too thin; your daddy’s too fat

Although I loved the posts on social media saying the final score could not be overturned. 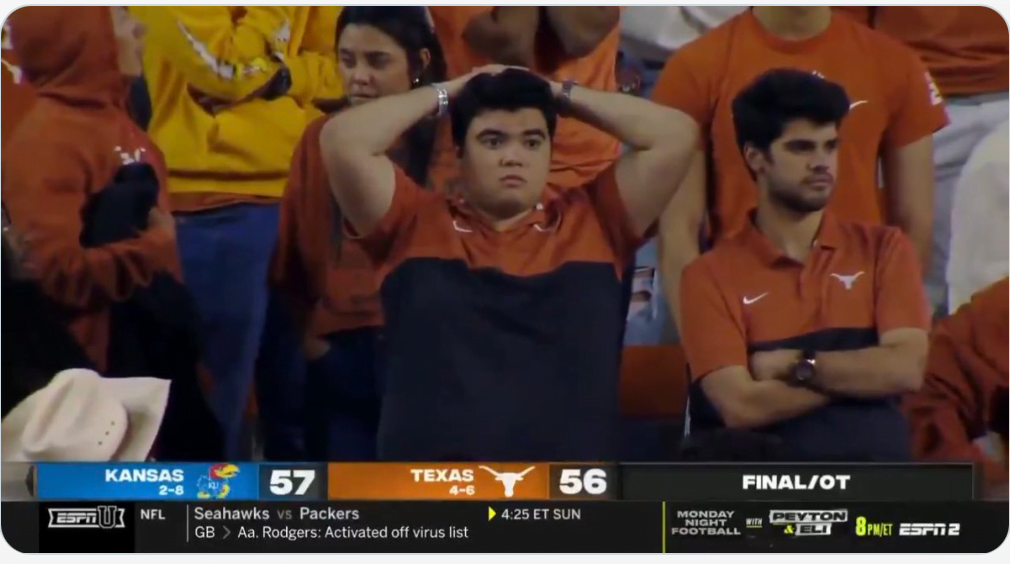 Feel so bad for the Longhorns … not really

After a celebratory adult beverage at the West Table, we went home and watched a fascinating documentary about the impact of Native Americans on American music. Then, just before we headed to bed, I was curious to see how bad Texas beat Kansas.

The Longhorns, as you probably know, lost 56-55 in overtime.

Been laughing ever since. And, of course, earlier in the day, Baylor knocked off Oklahoma.

It was a great day for the teams I heard called the Irate 8, who rebuilt the Big 12 after UT and OU announced they were defecting to the Southeastern Conference.

Hard to think after Texas pummeled Tech 70-35 weeks ago the Red Raiders would be bowl eligible and the Longhorns would be 4-6 with their fifth straight loss, which hasn’t happened since 1956.

As others have said, I’m happy for Texas to be moving to the SEC because the Big 12 teams are so far below them … except in the standings.

Still hope the momentum is there to change how the Permanent University Fund is distributed. Texas Tech and Houston, at least, deserve a share.

On the other hand, maybe we should let UT keep its PUF money to pay for fan counseling services.

Nah …  let’s fix this decades-long injustice (by persevering, not whining). One third for the school in Austin with the 4-6 football team, a third for Texas A&M and a third to be split by Texas Tech and Houston.

You work for a big organization. Lots of employees.  One is a star. Performs well and brings a lot of positive recognition to the  organization.

One day the star asks to bypass his direct supervisor, go over the next supervisor and answer directly to the owner.

How soon until the star is told to work somewhere else?

That’s not how Mike Leach’s time at Texas Tech ended … but foreshadowed it.

Leach was part of a team, answering to  then-Athletic Director Gerald Myers.

When I was editor of the Avalanche-Journal, I was part of a team answering to then-Publisher Steve Beasley. On the organizational chart, I was at the same level as the advertising director, circulation direction and other department heads.  But many people believed I ran the place because of how editors are portrayed in TV and movies. You never thought Perry White had a boss. Publishers outrank editors, but  a lot of people don’t know that. I never wanted my fellow department heads to think I felt I was above them.

Yes, football is the cash cow program and Leach helped Tech’s succeed. But should he have seen himself as more important than Bob Knight, Wes Kittley and other coaches? No. If anyone, a coach should understand how teams work.

Leach had worn out his welcome with many people on campus.

For that reason and many others, Leach had worn out his welcome with many people on campus.

Now that Joey McGuire has been named Texas Tech’s 17th football coach, can a few people finally move on? The university has. Leach has.

In between the time Matt Wells was fired and McGuire hired, twits on social media kept playing the Leach card.  How this terrible wrong could finally be righted. How Tech will never be successful without the Pirate.  How a struggling football program hurts the Lubbock economy and the only answer is to bring him back.

“Here we go again, wrong choice, they just can’t bring their selves hir (sic) back Coach Leach because they don’t want to be embarrassed about their initial stupidity. Might be time to send some of the top athletic staff and regents packing.”

“They should have ate crow and done anything and everything  to get Leach back.”

Is there some connection between the intelligence of these opinions and their use of language?

To quote the Eagles, get over it.

Fans like to talk how good things were in the Leach era and they were.

But was Texas Tech an elite program?

As of Sunday morning, Leach’s Mississippi State Bulldogs are 6-4, just like Tech. Yes, they’ve had some impressive wins, but since leaving Lubbock, Leach’s teams have not been elite. Exciting? Yes.  Ability to pull off impressive upsets? You bet.

Leach’s teams are exciting and fun.

But not elite. His record is 65-58 since leaving the High Plains.

Elite is four trips to the College World Series since Tim Tadlock took over the Red Raider baseball team. Elite is a national championship in track and field thanks to the juggernaut Wes Kittley has built. Elite is coming within three seconds of a natty in men’s basketball.

And that’s what Texas Tech football was a few years ago … a record-setting highlight team with one amazing season ending with two losses in its last three games.

What Texas Tech Athletics wants is a team that wins a Big 12 championship, gets to the College Football Playoff and wins a title. That’s elite.

Can Joey McGuire make that happen?

But for one night the highlight magic was back.

Now it’s time to take it, as the cliche goes, to the next level.