Jackie and Christy* are Lubbock County employees. Both are female; but that’s pretty well where the similarities end.

Jackie comes to work when she feels like it. She’s paid whether she shows up or not. Hers is an appointed position. She has a title. And she is paid quite handsomely, $120,000. Probably much more. If she doesn’t feel like working, it’s no big deal; she stays home. Often. No one docks Jackie’s pay.

Christy comes to work whether she feels like it or not. She is only paid for an hour if she works an hour. And speaking of pay, hers doesn’t top $15/hour. Probably much less.

If you want to know Jackie’s attendance record, you’re out of luck. The $120,000+ employee has a different set of rules for herself than for most other county employees. She doesn’t punch a time clock. Consequently, Jackie doesn’t come to work every day.

When Jackie does come to work, she and her employees cook and serve breakfast on county time.

If you’re curious whether Christy worked on a given day, you can do an open records request for Christy’s time card. And, with certain redactions, you’ll get it. You’ll see that Christy works every day she is paid.

When Jackie does come to work, she and her employees cook and serve breakfast on county time. Apparently Jackie and her people have plenty of time on their hands. No one is doing double duty there.

Christy doesn’t eat breakfast at work. Her job is too important. She can’t be spared for the time it takes to prepare and eat breakfast on the job.

Jackie is entitled to take fancy vacations on taxpayer dollars. She favors Vegas where she gets training on how to punch a time clock. It must be exhaustive. Jackie is so irrelevant that she regularly misses County Commissioner meetings. She can be gone weeks at a time with no apparent change in performance level.

If everyone followed Christy’s example, the courthouse would be a better place.

Christy doesn’t get fancy trips on county time; she already knows how to punch a time clock. Indeed, we couldn’t spare Christy that long. Her job is mission critical. A half day without Christy and Lubbock County would be, quite literally, in a mess.

Jackie is the Lubbock County Auditor. To put it simply, Jackie’s office grades the papers of every other office in the county. The work product of the office is sloppy. Her reports do not reconcile and the account balances attribute funds to the wrong accounts. She has been complicit in spending the county’s reserves down to dangerous levels. 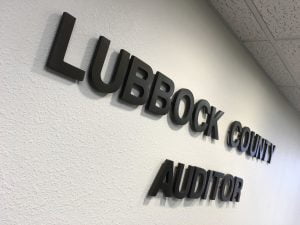 If everyone followed Jackie’s example, the courthouse would smell like bacon and eggs all day, people would only come to work when they felt like it and the county would go broke. Oh, wait, the county is going broke. And it’s no wonder.

Christy’s job is far more critical than Jackie’s. Christy is responsible for janitorial services on two floors of the courthouse. It used to be just one. Cutbacks have increased her workload. Now she cleans two floors; it’s OK for janitorial to do double-duty.

But because Jackie has done her job poorly … Christy won’t get a raise this year.

Christy’s work product is stellar and she does her job with a smile. The floors are spotless. The bathrooms are clean and pleasant. Lots of people come through the courthouse every day and if it weren’t for Christy’s reliability and excellence, the place would become a dump.

If every department followed Christy’s example, the courthouse would be a better place.

But because Jackie has done her job poorly and allowed county reserves to be spent to a dangerously low level without sounding a warning, Christy won’t get a raise this year. And yes, Jackie had help with that.

While Jackie the highly paid employee is compensated whether she comes to work or not, Jackie the county auditor will not approve Christy being paid if she fails to show for work. But, of course, Christy would never expect to be paid for work she didn’t do.

On the days Jackie comes to work, she leaves between 4 and 5 to go her home in Hale County.

Every day Christy leaves about 4:30 to go to her second job: another janitorial position.

What is the difference between Jackie and Christy? Accountability, that’s all.

*”Christy” is the name I’ve chosen for her; the janitorial staff at the courthouse leads the county for excellence in performance.