Nearly all types of legislation include some form of morality direction, but some more so than others. Though our outdated Texas blue laws have been diluted over the years, we Texans seem to tolerate our government-issued red tape when it comes to certain things like gambling, alcohol, and formerly, buying women’s hosiery on Sundays.

Texas is not alone with these issues, however.

In 1992, the 102nd U.S. Congress passed the Professional and Amateur Sports Protection Act, also known as PASPA, after finding sports gambling was a harmful national problem.

The Commerce Clause is the legislative branch’s foremost power base.

The act prohibited states from allowing any type of wagering program based on competitive sporting events. Congress passed that, claiming they had the ability to do so under the Commerce Clause of the United States Constitution in Article 1, Section 8, Clause 3, which gives Congress the power to “regulate commerce with foreign nations, and among the several states, and with the Indian tribes.”

Due to the sheer breadth allowed by that language, the Commerce Clause is the legislative branch’s foremost power base and has been applied to matters ranging from a federal kidnapping act following the abduction and murder of the Lindbergh baby to federal mud flap regulations after the state of Illinois attempted to require truck drivers to use specially curved mud flaps. 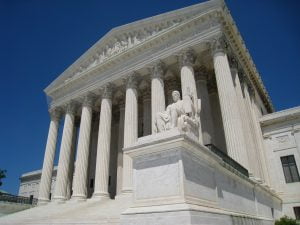 At times, legislation made under Congress’s extremely broad Commerce Clause power can conflict with other portions of the Constitution, particularly in this instance, the Tenth Amendment.

For those who were thinking about Steppenwolf rather than paying attention in government class, the Tenth Amendment holds that any power not delegated to the federal government by the Constitution is reserved for the states to decide.

However, this can conflict with the Supremacy Clause found in Article 6, Clause 2 of the Constitution, which holds that federal law supersedes any inconsistent state law or regulation. These can all be pitted against each other when the federal government chooses to lay out regulations, keeping private attorneys and state solicitors general flush with work.

This decision doesn’t mean everyone can go full Pete Rose wherever they would like.

The main catalyst behind the Supreme Court of the United States’ recent decision in Murphy v. National Collegiate Athletic Assn. was New Jersey, whose legislatures had been tinkering with the idea of setting up a sports gambling scheme in Atlantic City since before PASPA was passed.

Four states were grandfathered in regarding sports betting, but political infighting in 1992 and 1993 kept the Garden State from passing legislation to create a betting scheme before PASPA clamped down on the nation.

Though PASPA did not make sports gambling a federal crime, it did allow the United States attorney general and other sports organizations to stop it by filing a civil action in the courts. New Jersey passed the Sports Wagering Act in 2012 and five different sports leagues sued to stop it.

This left the Supreme Court to decide whether or not a federal statute that prohibits modification or repeal of state law prohibitions on private conduct was in violation of the Anti-Commandeering Doctrine, as coined by Justice Sandra Day O’Connor in 1992.

In New York v. United States, Justice O’Connor said, “As an initial matter, Congress may not simply ‘Commandeer the legislative processes of the States by Directly compelling them to enact and enforce a federal regulatory program.’”

This case was more about congressional power vs. states’ rights than it ever was about gambling.

Justice Samuel Alito authored the 6-3 opinion, which explained when a state completely or partially repeals old laws banning sports gambling schemes, it authorizes them under PASPA.

Alito held PASPA’s anti-authorization provision “unequivocally dictates what a state legislature may and may not do” and this is violative of the basic principle Congress cannot issue direct orders to state legislatures.

Justice Ruth Bader Ginsburg, who is largely undeserving of the “Notorious RBG” meme status many law students have bestowed upon her, dissented, because though she will be well-written, she will do any legal tap dance necessary in order to expand federal power by robbing it from the states.

However, this decision doesn’t mean everyone can go full Pete Rose wherever they would like. States now have control over the legality of sports betting and may pass statutes that allow for this type of gambling. It appears as though several states may choose to realize a tax stream from this particular method of play. I’m not a legislator, but I don’t expect Texas to follow suit, though I do hope they consider it as a form of revenue that isn’t tied to our homes, businesses, and living expenditures.

This case was more about congressional power vs. states’ rights than it ever was about gambling. In a rare show of force, six of the nine most powerful people in the United States have managed to undo one of so many federal government overreaches. Here’s to hoping this is a trend that could continue for years to come, though I wouldn’t bet on it.