“You can get out of my office right now,” said Fat Tony.

All I’d done is ask a question. I’d no idea the man was so emotional.

“I really don’t know how you got in here in the first place,” he said. “Get out.”

Okay, I’d kind of wondered the same thing but I’d assumed it was my charm.

Apparently the invitation to listen to the Bonnen/Sullivan audio at Fat Tony’s “luxury law offices” was never intended to be a question-and-answer session.

And so ended my quest into the cloak-and-dagger world of Empower Texas and Michael Quinn Sullivan.

And Fat Tony’s reaction to my question told me I’d struck a nerve and left me believing the answer is, “yes.”

But we’re getting ahead of the process. And the process is the story worth telling here.

For something with such build-up the actual content of the meeting is disappointingly mundane, as political discussions go. But the experience into, not to mention out of, the Empower Texas world is fascinating. I would soon learn my destination was not merely a shabby little law office, it’s the Empower Texas Echo Chamber.

I’d asked to listen to the infamous audio on August 20. In response to the request I received a screening call grilling me on my political credentials: active in the Republican party for 25+ years, precinct chair, two-term county chair, Trump elector.

“But is there anything else you’ve done?” she asks.

We are getting the spin on the words before the words are even spoken.

Like what, I wonder? I play my hole card: associate editor of Lubbock Lights. She isn’t impressed.

I hang up the phone call feeling I’ve failed to invoke some Shibboleth she was probing for. Perhaps there was some Empower Texas password I should have mentioned.

I felt like I’d invited myself to a party with the cool kids; they said maybe, but I knew I wasn’t wanted.

And sure enough, weeks went by and no call came. Finally, certain I’d never get the call, I jabbed a respected friend who is on the Empower payroll and who has the secret decoder ring to prove it. He said he’d see what he could do.

When the call finally came it was from a Dallas number: be at Fat Tony’s office in Austin 1 p.m. Friday.

Then a second call: the time has changed, be at Fat Tony’s at 1:30 instead. I fully expected to hear, “this message will self-destruct in five seconds.”

Fat Tony’s office building is so narrow I miss the address. “Make a U-turn at the next alley and the destination is on your left.”

“Proceed to the route.” Up to the 9th floor. I hesitate at the door. The shades are drawn so I cannot see the interior. Is there a secret knock? A trap door just inside? Will there be a body-cavity search?

I open the door to a small reception area where a blonde intern is balancing a keyboard on her lap as she tries to type.

It’s a seedy little space. Straight ahead I see someone who can only be Fat Tony sitting in a low sofa. He waves me into an even smaller office where three people are already crowded around a kitchen table with speakers sitting on it.

Why did Michael Quinn Sullivan ask for a list?

A pimply-faced Techno-Nerd with a laptop points to the chair beside him. I squeeze in and sit with my Moleskine half on and half off the table.

Fat Tony says Techno-Nerd is here to play the recording for us and he will be back afterwards to answer any questions. Do I want any water?

I would learn he was just kidding about answering questions.

He sets a glass of water in front of me and asks if I agree to not record the session. This seems an odd introduction to hearing a surreptitiously recorded conversation. But I want to hear the recording so I agree; and I keep my word.

On the flight to Austin that morning I’d debated with myself whether it was morally acceptable to lie to a liar in the context of the lie the liar told. I tabled the debate upon consideration that I didn’t know for certain whether Michael Quinn Sullivan had agreed to confidentiality.

That seemed to me to be a really big question then. Sitting at the kitchen table with Fat Tony demanding I swear allegiance, it seems an even bigger question.

After Fat Tony leaves, Techno-Nerd begins explaining what we are about to hear.

“Did Michael Quinn Sullivan make the same commitment of confidentiality you are asking us to make?” I ask Techno-Nerd.

“I don’t understand the question,” he replies.

I ask the question again, but louder this time. That always works.

“The question doesn’t register for some reason,” responded Techno-Nerd. “Tony will be back in after to answer your questions.”

Bonnen and Sullivan agreed the meeting was confidential.

Across the table sits Beth Biesel. Beth, “forum chief” of the American Liberty Forum, says she is leading an effort calling for the resignations of Bonnen and Burrows. The petition has been out for two weeks and, being a thoughtful person, Beth decided she should listen to the audio first hand. 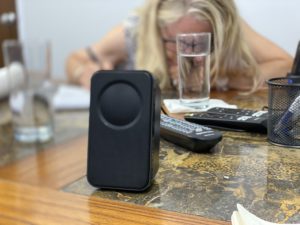 “So you launched the petition before your heard the audio?”

What do you bet Michael didn’t promise her confidentiality?

It becomes evident Techno-Nerd is not here for his computer skills. He is incapable of mastering the 10-second rewind, but does provide ongoing editorial commentary on what we are hearing. He keep a running exaggeration of what is being said. We are getting the spin on the words before the words are even spoken.

Three times he tells us, “this is where the quid pro quo happens.” Three times there is nothing there. Apparently Techno-Nerd didn’t take Latin; there was never one thing offered for another.

Techno-Nerd’s de facto function is filling in the blanks on what wasn’t said and to point out what is appropriate for an Empower Texas Echo Chamber discussion. He stops the recording to inject words, ideas and explanations found nowhere in the audio.

After 15 minutes I ask Techno-Nerd to shut up with the spin and no one objects. He looks hurt and resentful. As for me, like the boy who went to the party uninvited, I wasn’t wearing the right clothes or singing in tune. And I can tell from the looks he is giving me I’m not leaving with a secret decoder ring either.

It is a massive and successful propaganda effort to control the spin while concealing the facts.

If Michael Quinn Sullivan ever releases the recording, something I believe would be very damaging to him, you can judge the entire content for yourself. My interest was and is the process … and the process is very agendized.

Some general observations. First, Bonnen and Sullivan agreed the meeting was confidential.

Bonnen: “…begging this is all confidential?”
Sullivan: “Oh yeah.”

The meeting must be viewed in the framework of something all parties agreed was private but one party lied about.

As to the alleged profanity, the worst word used often precedes ——creek or follows bull——. Used twice; perhaps thrice. There was no profanity. Bonnen told an off-color joke about a member (wonder if his wife knows he’s gay?); there were laughs all around.

Was there a list? Sullivan asked for one but none was offered by Bonnen. Why did Sullivan ask for a list?

Later, after Bonnen left, there was a review by Burrows of those Republicans who voted against ending taxpayer funded lobbying. Some were judged salvageable; nine or ten aren’t worth bringing back, that is if you want to target some Republicans.

The dishonor of this affair is the mystery of Michael Quinn Sullivan’s dishonesty. His spin has mischaracterized the nature of the meeting. He makes many statements in the discussion and we are left wondering whether those words, like his agreement to confidentiality, are also disingenuous? I am forced to remember this is the same person who falsely tweeted that Chancellor Robert Duncan was fired for “misappropriation of funds.”

Even the carefully chosen (“I don’t know how you got in here”) group of fewer than 100 who have listened to the audio have been selected as either targets of the discussion or Empower partisans and subjected to spin and commentary even as they listened.

Is Michael Quinn Sullivan in the employ of proponents of taxpayer funded lobbying?

This is not a noble attempt to disseminate the truth, it’s a massive and successful propaganda effort to control the spin while concealing the facts from the general public. There’s no transparency here.

At the end of the recording, I’m left puzzled as to what is the man’s angle? Bonnen and Burrows were candid: help us win 2020 and here are some RINO Republicans for you if you’re looking for some.

But other than destruction and chaos, what precisely is Sullivan’s agenda? After listening to the recording, I wanted to know, is Sullivan advancing a hidden cause?

Like others, I’ve heard the rumors Sullivan is actually a Fifth Columnist. A wolf in sheep’s clothing supported by anti-conservative forces. Last week, an article in The Intercept demonstrated a link between Sullivan’s funding and several public employee retirement funds.

So, when Fat Tony comes back into the echo chamber I ask the question, “Is Michael Quinn Sullivan in the employ of proponents of taxpayer-funded lobbying?”

And that’s when Fat Tony, Michael Quinn Sullivan’s attorney, exploded, accused me of being hostile, refused to answer my question and kicked me out of the echo chamber.

Makes you wonder what is the answer, doesn’t it?

Editor’s disclosure: L. Scott Mann wrote this piece about his experience hearing the infamous Bonnen-Sullivan-Burrows reocording. Scott and Dustin are friends and even though Scott has been active in politics for a long time and has worked on many campaigns, he’s never worked on any of Dustin’s campaigns and is not employed by him in any capacity.