I don’t like this one, but I love the response.

According to a Los Angeles Times article, the head of the California Democratic Party called for a boycott of In-N-Out Burger because the popular burger chain — which has expanded to Texas and has been rumored it’s coming to Lubbock  — donated $25,000 to the California Republican Party.

(The photo below shows Texans lining up for free In-N-Out in Richardson earlier this month.)

The article quoted a Democrat who was waiting at a Southern California In-N-Out for a meal  saying party loyalty only goes so far.

“Eating at In-N-Out is such a standard thing to do across California,” he told the Times, dismissing the boycott idea as a bit silly.

In-N-Out is a California institution.

Democrats started distancing themselves from the idea and Republicans were making big orders and posting photos on social media, said the story.

“We have all of our children eating In-N-Out burgers. Even my son’s German shepherd eats In-N-Out,” said state Sen. Jim Nielsen, R-Gerber, whose staff ordered 25 burgers and 50 bags of fries for lunch, reported the Times.

Shout out to my cousin Daniel King in Chicago, who is a Lubbock Lights fan and posted this on social media where I saw it. He also loves In-N-Out Burger. 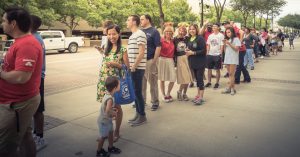