Latest News
Your vote in two Lubbock County judicial runoffs has more impact than when you vote for president … so go voteAt this tipping point in our post-George Floyd country, we can all get better about race, but let’s not wipe our minds and history in the processHow 14 pennies decades ago became priceless for Lubbock attorney Don RichardsEvie Mae’s beloved ‘cue in Wolfforth figured out how to meat the demand during virus restrictionsNow that we’ve somewhat opened, if you’re not wearing a mask, please put one on

With so many varied things to do, some for adults and some of them family offerings, I make an effort to include both the obvious and out-of-the-box entertainment samples which may be making brief Lubbock visits, an example being the city’s weekly Film Club offerings.

Then again, the Cactus is providing a blast from the past and one cannot deny the nostalgic appeal of this weekend’s play produced by Lubbock Community Theatre at LHUCA. Our only goal: Inspire readers to leave the recliner and/or couch behind, try out some Lubbock entertainment and have fun.

Darryl Holland, owner of the Cactus Theater at 1812 Buddy Holly Ave., already is known as a fan of great guitar music. I was excited to hear he’s booked of The Ventures, who helped popularize the electric guitar world-wide.

The Ventures will perform for approximately two hours at 7:30 p.m. Saturday, at the Cactus. Reserved seats on the first four rows at the Cactus Theater are $35. Remaining floor seats are $30. Tickets for standard balcony seating is $25 and limited balcony box seats are $60 (with no additional charge for concessions).

Tickets are available by calling 762-3233, or just drop by the box office at 1812 Buddy Holly Ave. All sales are final. The theater’s ticketing system and contractual obligations to performers does not permit exchanges, refunds or credit toward future shows with unused tickets. Box office hours are 3-5 p.m. Monday-Thursday, provided Monday is not a major holiday and 3-9:30 p.m. Saturdays when there’s a Saturday concert.

The Ventures arrived as a 1960s instrumental rock band and eventually became more popular in Japan, in large part because no lyrics needed translation. It became the top-selling instrumental band of all time. More than 100 million albums by The Ventures have been sold. Thirty-eight of the band’s albums charted in the United States.

A tiny bit of research proves I wasn’t the only young teen who loved this band. Trivia: Gene Simmons and Jeff Baxter were early members of the Ventures Fan Club. George Harrison told Guitar Player magazine that he preferred the American guitar sound of The Ventures to British bands of the same era. Asked to cite favorite rock guitar solos, Joe Walsh picked The Ventures “Walk, Don’t Run” because “it changed so many guitar players’ lives.” Stephen Stills told The Ventures’ Don Wilson he learned to play guitar by listening to Ventures records. Carl Wilson called The Ventures a major influence on his early guitar-playing; he pointed out The Beach Boys learned to play every Ventures’ hit by ear.

I found LPs by The Ventures during my pre-teen years and I still was playing them in Murdough Hall at Texas Tech. Even now it’s fun listening to “The Lonely Bull,” “Tequila,” “Surf Rider,” “Perfidia,” “Out of Limits,” “Slaughter on 10th Avenue” and the band’s incomparable arrangement of “Hawaii Five-O.”

Their instrumental virtuosity, innovation and unique sound influenced so many musicians and bands that The Ventures also were called “The Band That Launched a Thousand Bands.”

When the band was inducted into the Rock and Roll Hall of Fame in 2008, John Fogarty introduced them and said The Ventures “kicked open a whole movement in rock and roll,” adding the “audacity” of their sound “empowered guitarists.” 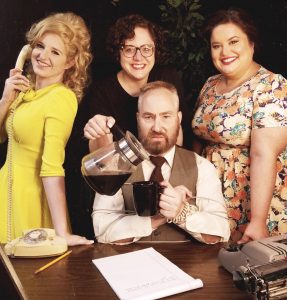 Lubbock Community Theatre (LCT) director Heather May appears to have cast her stage adaptation of 1980 movie “Nine to Five” with fun in mind and all looking forward to songs penned for Broadway by Dolly Parton.

The 1980 film comedy was an office satire about three female secretaries (played by Dolly Parton as Doralee, Jane Fonda as Judy and Lily Tomlin as Violet) who decide to get revenge on their tyrannical, sexist boss (Dabney Coleman as Mr. Hart) by abducting him and running the business themselves. The trio, one of whom having been passed over for promotion because she is a woman, spend a night together sharing drug-induced fantasies of killing the slave-driving chauvinist – although one panics the next day when she suspects she really did poison the tyrant.

Buy tickets by calling LCT at 749-2416 or visiting lubbockcommunitytheatre.org.

The local production finds director May convincing professional actor and LCT alum Chad Anthony Miller to return to Lubbock to breathe life into the sexist/chauvinist boss Hart – while the primary put-upon employees feature Kelsie Curry as Doralee, Annie Burge as Judy and Erin Castle as Violet. Supporting roles include Anna Ruth Aaron-Despain as Roz, Travis Burge as Joe and Randall Ramirez as Dwayne.

Ian Klotzman is music director and Tamara Smith is the show’s choreographer. Set and lighting design are by Vatlin Alldredge and Ginger Angstadt, respectively. Costumes are provided by the team of Carol Fowler, Patti Campbell and Diane Bancroft.

Nearly 30 years separated the film and its 2008 jump to Broadway. The play received four Tony Award nominations, winning none; the play also closed relatively quickly in September 2009. That said, “9 to 5: The Musical” earned 15 Drama Desk Award nominations, the most received by any production in a single year.

National tours began in 2010 in the United States and this musical comedy also opened on the West End in London in February of this year.

The critic for the New York Daily News loved Parton’s songs in the Broadway production, writing, “What’s fresh and original are Dolly Parton’s bouncy, big-hearted songs, which accompany the familiar title tune. Not every tune is a home run and some lyrics are too plain-spoken. But enough of them stand out, like ‘I Just Might,’ a bright, optimistic ballad.

“The best number, ‘Change It,’ is about the office, but really addresses larger issues and makes the show shine.”

Born in Fort Worth, but raised in West Texas ranch country, James followed a family tradition to his musical career.

James is the headliner at 11:15 p.m. Saturday at Blue Light Live, 1806 Buddy Holly Ave. There is no opening act, with doors opening at 9 p.m. James is expected to play an array of his Americana and country originals, with a $12 cover charge.

Seth’s grandfather was a honky tonk piano player, making a home of the Texas nightclubs of the 1940s and ‘50s; his father played a set of gold sparkle drums across the state. James was influenced by their stories about life on the road.

It was Seth’s father who gave him his first guitar, a Gibson Southern Jumbo, accompanied by a short lesson on how to play Dire Straits’ “Sultans of Swing.” James had no trouble teaching himself songs after that and, in 1996, bought his first Fender Stratocaster guitar.

He played across the country and released three solo albums before deciding to form a new band, The Departed, with old buddy Cody Canada in 2010. Three years later, after releasing two albums with The Departed, Seth decided to step down and tour once again as an original singer-songwriter.

James calls the album “A Million Miles of Love,” which features himself with Jessica Murray, “a love letter from our hearts to yours.”

Time truly must be flying if the 2019 series of Summer Showcase concerts are being introduced – and again, local R&B and funk band Element will kick off this attraction.

Those driving by the Buddy Holly Center on Thursday evenings have grown accustomed to seeing full parking lots and lots of smiling people. In fact, Summer Showcases do not even allow enough time to head home and freshen up after work.

Instead, for more than three months, a different entertainer headlines from 5:30 p.m. to 7:30 p.m. each Thursday outdoors in the Meadows Courtyard, where new brick was laid earlier this year next to the Buddy Holly Center, 1801 Crickets Ave.

There is no admission charge. No outside beverages are allowed, but each Thursday finds food trucks and a cash bar open on site.

Looking ahead, Mike Pritchard stands to be the headliner for the second 2019 Summer Showcase on May 30.

Elisabeth Moss, previously nominated for a Tony Award for “The Heidi Chronicles,” is said to carry this film as fictional rock star Becky Something. She leads her band to brief stretches of fame, which inevitably wind up lost thanks to her own self-destructive behavior.

The film earned terrific reviews from critics when screened this year at South by Southwest, as well as in 2018 at the Toronto International Film Festival and the New York Film Festival.

Directed by Alex Ross Perry, “Her Smell” is told via five distinct sequences punctuated with some home movie footage from early in the band’s successful years – when it was appearing on magazine covers, attending photo shoots and during the acceptance of gold records.

For example, in the first sequence, Becky’s punk rock group, called Something She, finishes a concert – but Becky’s mood causes a violent shift from happy to aggressive as her band mates, her ex-husband Danny (Dan Stevens), her manager Howard (Eric Stoltz) and a former musical collaborator (Amber Heard as Zelda) all try to steer her toward positive choices.

In the final piece, 11 years have passed since Howard signed Something She. But the band somehow still has an opportunity to take part in a showcase. Becky’s talent remains undeniable and her behavior just as unpredictable.

Critic David Ehrlich wrote for Indiewire.com, “This intimate punk epic dares you to walk out from the moment it starts, but rewards those who stick it out to the end.”