I did not plan it, but last weekend’s Best Bets included a couple sold out occasions, one being the Texas Tech Red Raiders baseball team hosting another NCAA Regional tournament at Tech’s Dan Law Field. Tickets sold even faster than usual.

After Tech won every game, sweeping this Regional, the NCAA decided the Red Raiders deserved to stay at home as they compete in a tough Super Regional tourney against the Oklahoma State Cowboys on Friday through Sunday. Last week’s telecasts made me see red because we noticed some seating … prime right behind the plate and others with nice sight lines down the base lines … not being used. With sellouts announced, I assume some fans did not use their tickets and also did not bother to make sure they were used by anyone else. Call that a sports sin.

It’s a safe bet the Super Regional also will be an official sellout.

For that matter, the Cactus Theater is paying tribute to an unexpected grouping of bands, with gifted locals playing songs by Fleetwood Mac, Whitesnake and Foreigner. Originality alone made this concert a possible best bet … but the Friday show  is a sellout.

So, let’s move on to events you can experience in person.

Mike and the Moonpies

Never let it be said band names carry no weight.

My music-loving wife, Jill, never has seen a performance by this Texas band. Yet Jill told me the band made the jump to her bucket list; she concluded it must be great “because it has such a great name.”

Mike and the Moonpies  – founded in Houston in 2007 by singer-songwriter and guitarist Mike Harmeier  – plays at 11 p.m. Friday at the Blue Light Live, 1806 Buddy Holly Ave. Doors open at 9 p.m., and early arrival is suggested. There is an $8 cover charge.

No one will mistake them for Mike and the Mechanics, a successful side rock project formed by Genesis cofounder Mike Rutherford.

Critics identify the Moonpies as playing “country and Americana,” while Harmeier leans more toward tradition and calls his ensemble “just a honky tonk band.”

Mike and the Moonpies still tour in support of 2018 album release “Steak Night at the Prairie Rose,” with the title a salute to one of Harmeier’s early muses. Having been influenced by traditional country music when very young, he was leading his own country band by the time he turned 14. That was when his band was hired to play every Wednesday – Steak Night – at a bar called the Prairie Rose in Houston.

“Steak Night at the Prairie Rise” is the band’s fifth album and fourth studio release, arriving on the heels of “Live at the WinStar World Casino and Resort.”

While growing up in Houston, Harmeier was able to attend concerts whenever he wanted at the famed annual Houston Stock Show and Rodeo, where his father worked. Many visiting headliners and sidemen would accept dinners at the Harmeier household.

Harmeier says he does not see family members as much as he’d like, which may be why he writes so many songs influenced by memories and family members. Even when his parents divorced, Harmeier’s dad rented a room at his house to recording artist Clint Black’s brother, Brian, who also is a musician.

Although the Moonpies have gravitated to regular gigs at the White Horse bar in Austin, they gradually attracted crowds in Austin via a Monday night residency at the Hole in the Wall, described in the band’s biography as “a dive bar on the University of Texas drag.”

Dustin Six, co-owner of the Blue Light, told Lubbock Lights, “The band’s current album ranked number 17 on Rolling Stone’s 40 best country and Americana albums of last year. They got their start in Austin at a place called the Hole in the Wall. I’ve never been there, but I assume part of the reason they may enjoy playing the Blue Light is that it may remind them of home a bit.” 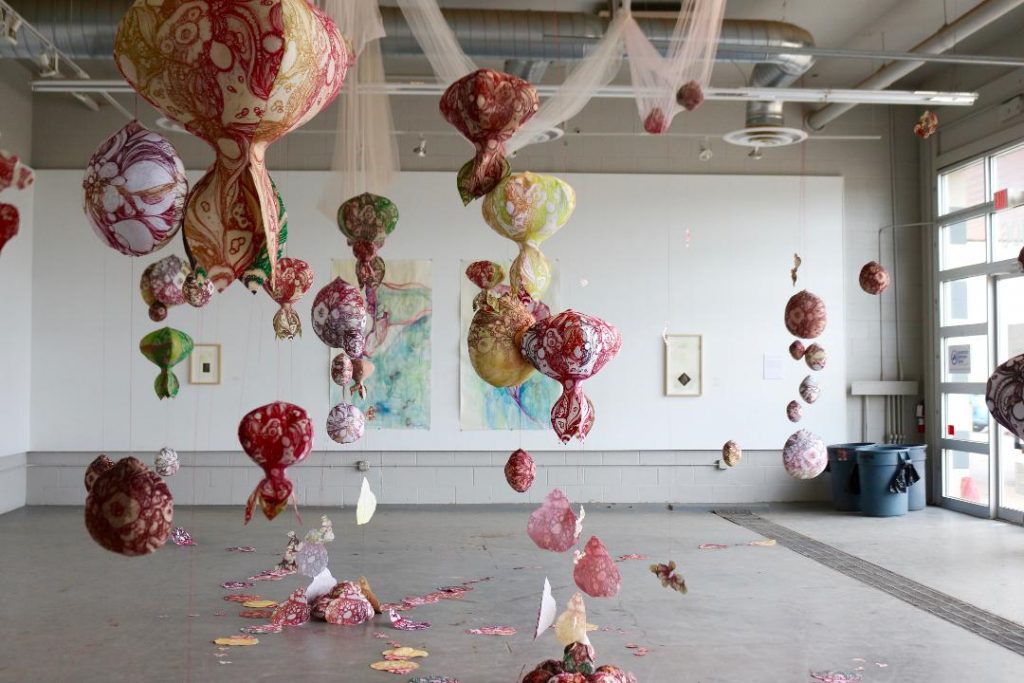 Friday will find people parking anywhere they can – and never mind any reserved signs – near LHUCA, Buddy Holley Center, GlassyAlley Art Studio & Gallery or the Tornado Gallery. That is because these are the four sites from which trolleys, or small buses, will depart during the 177th non-consecutive First Friday Art Trail.

The art trail is a free, self-guided art happening which, between 6-9 p.m., becomes a monthly Event with a capital E in Lubbock.

True, many college students and faculty members are gone for the summer. In the fall and spring, Art trails find trolleys making approximately 20 or more stops at venues, where visitors view original art produced locally or in the region. On Friday, trolleys will stop and linger at only half that number.

And yet, despite fewer artists participating during summer months, the streets in Lubbock’s arts district might be crowded with visitors.

First Friday Art Trail could, at some point, near art party status. Food trucks line up. Wine is available for those of legal age. And certain offshoots, such as Charles Adams’ Studio Projects (CASP), are not waiting until fall to expand. There is the Charles Adams Gallery, and Adams 5th & J Gallery.

Yet Adams’ “Live/Work” Studios – where artists apply for a small space in which they literally both live and work, and are expected to exhibit – have expanded. There are the original side-by-side flats for four artists, exhibiting in Galleries 1, 2, 3 and 4 at 1010 Mac Davis Lane.

Art varies in this new space, from performance art to visual art. Plus, studios may vary from housing one artist to as many as four.

Hundreds of art works are on display. Visitors range from serious collectors to those browsing or seeking a perfect, out of the ordinary, gift.

‘The Secret Life of Pets 2’

The computer-animated movie comedy “The Secret Life of Pets” was released in 2016 and many moviegoers hoped for a sequel equally entertaining for family audiences. The story showed how pets stay busy at home while their owners are away at their jobs.

Mind you, a serious, real-life problem did emerge.

The leading animated role of Max, a Jack Russell terrier, originally featured the voice of comic Louis C.K. – but there was no dog-gone way he would be recast. After being accused, he admitted to sexual misconduct with five women.

Producers decided to keep the character Max, but replace C.K. with the voice of professional comedian and actor Patton Oswalt. Also new in the sequel is Harrison Ford as Rooster, a Welsh sheepdog and Tiffany Haddish as a Shih Tzu.

Those returning to provide voices include Eric Stonestreet as Duke, a large shaggy Newfoundland mix who lives with Max; Kevin Hart as Snowball, a white rabbit and former flushed pet; Jenny Slate as Gidget, a white Pomeranian; Lake Bell as Chloe, an obese and apathetic tabby cat; Dana Carvey as Pops, an elderly Basset hound paralyzed in his back legs; Chris Renaud as Norman, a guinea pig; Hannibal Buress as Buddy, a laid-back dachshund; Bobby Moynihan as Mel, a hyperactive pug; Tara Strong as Sweet Pea, a green and yellow budgie parakeet and Garth Jennings as a nameless hamster.

“The Secret Life of Pets 2” is released in 3-D, co-directed by Chris Renaud and Jonathan del Val and written by Brian Lynch.

The film’s synopsis finds animal characters taking part in several stories. For example, Max faces major changes after Katie, his owner, gets married and now has a child named Liam. Up to a point, Max becomes overprotective. Also, during a family trip to the country, Max meets a farm dog named Rooster, and both try to overcome their fears.

In another story, Gidget tries to rescue Max’s favorite toy from an apartment now filled with cats.

The movie is rated PG for action and rude humor.

I no longer do much shopping, which leads to the honest comment that, in all my years, I never have attended a Peddler Show. What makes it a Best Bet?

Those I do know who have attended tell me they had a lot of fun. Seriously. Second, sometimes one needs to be brave enough to try something new. And third, this event has been returning to Lubbock for more than 40 years.

Tickets cost $7 at the door. Children age 11 and younger are admitted free. One paid admission is good for entry throughout the weekend.

The event has been described as a perfect summer market where visitors can shop from talented designers, artisans, creators and craftsmen from across the country. Most participants also feature gifts for Father’s Day. From that description, the format sounds much like that at Lubbock’s annual spring arts festival but, again, I have not attended.

Shoppers have been described as “fiercely loyal” since 1977. For more details, see the web site at peddlershow.com.

The Llano Estacado Winery and Llano Estacado Clay Guild will celebrate fine art and fine wine as they co-sponsor the 22nd-annual Lubbock Wine and Clay Festival – and yes, I have attended this annual event many times.

Admission is free. Wine is available for $5 per glass and there will be food trucks on site.

For a $15 fee, a guest can purchase a commemorative wine glass and tickets good for three glasses of wine. Additional tickets also are available for purchase.

Live music will be provided by The Shane Rogers Band.

Local and regional artisans from Texas, New Mexico and Colorado will display and sell works of art, with media including ceramics, jewelry, textiles, wood, metals, sculpture and photography.

Demonstrations of working with clay to form ceramics take place at the winery only on Saturday.

A silent auction at the 2019 Wine and Clay Festival will benefit the Llano Estacado Clay Guild’s scholarship fund.

Proud details: The Llano Estacado Winery is the largest producer of premium wines in Texas. The winery produces more than 170,000 cases annually, primarily from grapes grown on the Texas High Plains within a 300-mile radius of Lubbock. The winery has won national and international awards for its broad range of wines.