One of the best things about Lubbock is “entertainment” takes so many forms in Lubbock. I do my best to look around and find cool events, both large and small, and both in and slightly out of the box. The goal is to give Lubbock Lights readers options, choices about what they might have fun checking out either this weekend, or, over the next seven days. So here are the week’s Best Bets, and yes, the first choice is a natural.

I did not start enjoying, researching and learning about the Maines Brothers Band until I accepted a position with Lubbock’s daily newspaper in 1976. Knowing only that, one can do enough math to figure out band members may not be spring chickens – although, trivia: One band member did father a Dixie Chick. Still, anyone who places age restrictions on making hot music just isn’t listening.

Consider: The Rolling Stones recently announced another American national tour. Front man/vocalist Mick Jagger and lead guitarist Keith Richards each are 75, and drummer Charlie Watts is laying down the beat at age 77. Do you think that will affect ticket sales? I’m guessing the Stones have been around a decade longer than the Maines Brothers Band.

While The Maines Brothers Band has been a constant supporter of the Lubbock Arts Alliance, which raises money to finance each year’s Lubbock Arts Festival, the band’s annual summer partnership with LAA began in 2007.

Which means this weekend will find The Maines Brothers Band’s 12th-annual Memorial Day Weekend  Concert and Panhandle Dance to benefit the Lubbock Arts Alliance. This weekend’s show is at 7:30 p.m. Saturday in the exhibition hall at the Lubbock Memorial Civic Center, 1501 Mac Davis Lane.

Briefly, the Lubbock Arts Alliance is the show sponsor, responsible for all expenses such as building rental, stage and lights and a set price contracted to pay the large, familiar and popular band. Proceeds beyond expenses, i.e. profits, are kept by the LAA to benefit the arts.

Tickets are being sold in two price ranges at Select-A-Seat outlets: $49 for floor seats and $38.75 for the tiered seating above, with both prices already including all service charges. Call Select-A-Seat at 770-2000 for information about outlets and advance ticket purchases.

Tickets for tiered seating also are expected to be available at the door Saturday.

That said, while a number of entertainers may be considered iconic entertainers in this region, it’s doubtful whether any other country ensemble ever has been so tightly bonded in the past 50 years to Lubbock and West Texas. Call it amazing or surprising, but the band’s self-described “aggressive country” sound is as physically moving and exciting now as it was when The Maines Brothers Band outshined headliner Alabama in the mid-1970s at the Lubbock Municipal Coliseum.

Lubbock clings to the Maines Brothers and not just by purchasing their original music, now available on CD format at Ralph’s Records.

“Everywhere we toured, all across the country, people would come up and say, ‘We went to Texas Tech, or we used to dance to your music at Cold Water Country or the Cotton Club,’” said steel guitarist Lloyd Maines,

In a concert and dance expected to last at least two hours, there are songs the band feels obligated to perform. Lloyd’s examples: “Amarillo Highway,” “Break the Fall,” “Cotton Pickin’ Time in Texas,” “Aint Nobody Lonely” and “Let the Hard Times Roll.”

The last time, Regner created dance areas on the sides of the stage, which, she said, remained packed all night. This weekend, there will be a larger dance area directly in front of the stage.

Regner promised sight lines will not be disrupted for those in the floor seats.

Absent this year is singer-songwriter Terri Hendrix, committed to caring for her parents this weekend.

The high point of their big label years, said Kenny Maines, was “playing at the Fan Fair Artist Showcase at the Nashville Race Track, and sharing the stage with some of our musical idols, including Johnny Cash, Johnny Paycheck and Jerry Lee Lewis.”

Performing after a long absence can be like riding a bicycle, said Steve Maines, noting reunited band members will rehearse for 10 to 12 hours before the Saturday concert.

Or as Lloyd Maines put it, “We go through the high points of a lot of songs. It all comes back pretty fast. I call it ‘as easy as riding a unicycle.’” 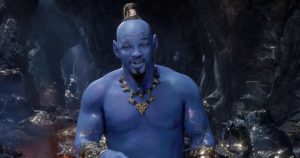 Already having arrived to less than stellar reviews is a live action retelling of 1941 animated film “Dumbo.”

The live action (with expected heavy CGI) remake of 1994 animated film “The Lion King” is slated to open in theaters on July 21.

Will Smith provides the image and voice of the blue genie, inspired somewhat by hilarious vocal additions made by the late Robin Williams for the earlier animated hit. Smith may be the most recognizable star, though. Other major live action characters: Mena Masoud as Aladdin, Naomi Scott as Princess Jasmine and Marwan Kuzari as the villain Jafar.

Many of the songs co-written by Oscar winner Alan Menken for the animated film will return. Benj Pasek and Justin Paul, the composing duo behind “La La Land” and “The Greatest Showman,” also are teaming up with Menken to compose new songs, including a solo for Jasmine and a duet with Aladdin.

I had expected to be offering a review this weekend; instead, being homebound after surgery caused me to miss the show. But I was able to communicate with co-star Chad Miller and director Heather May, who prepared the theatrical adaptation of the 1980 film for final performances this weekend at LHUCA.LCT’s performances of “9 to 5: The Musical” will take place at 7:30 p.m. Friday and Saturday and at 2:30 p.m. Sunday in the Firehouse Theatre at LHUCA, 511 Ave. K. The Saturday performance is almost sold out.

Reserved seats are $25 for the general public and $20 for students. Tickets can be purchased by calling LCT at 749-2416 or visiting web site lubbockcommunitytheatre.org.

Nearly 30 years separated the 1980 film comedy – which costarred Dolly Parton, Jane Fonda, Lily Tomlin and Dabney Coleman – and its 2008 jump to Broadway. The play received four Tony Award nominations, winning none; the play also closed relatively quickly in September 2009. That said, “9 to 5: The Musical” earned 15 Drama Desk Award nominations, the most received by any production in a single year.

“I wanted to work with Heather May to make my character a boss you love to hate. The one you are hoping gets his just desserts. When we get to that point in the show, audiences break into wild applause,” said Miller.

“My performance is shaped by the talented trifecta of Erin Castle, Ann Burge and Kelsey Curry. We have created such a fertile and creative playground for these characters. It’s intoxicating,” he added.

Lubbock Community Theatre (LCT) director May appears to have cast her stage adaptation of 1980 movie “Nine to Five” with fun in mind and all looking forward to songs penned for Broadway by Dolly Parton.

Most took time out to applaud music director Ian Klotzman.

“I have sought out Ian more than once to help me put these musicals on. He has a great way of blending seasoned, trained voices with people who have never sang onstage before. This is what makes LCT stand out. The ability to have stage veterans perform with newbies and make them all look great, is a huge feat. I think we do it well,” said May.

The director also finds relative messages standing out between the laughs. “I truly believe there are still values we strive for in today’s age. With the #metoo movement and equal rights still at the forefront of news and media, the story needs to continue to be told. This play may be a funny look at our past, but it is still relevant – because change is needed.”

Vietnam Medal of Honor recipient will be the guest speaker from 6:30 p.m. to 8:15 p.m. Sunday, May 26, during a Memorial Day service at Second Baptist Church, 6109 Chicago Ave.

Sponsors hope children and grandchildren also will listen to “an authentic American hero who was honored for his selfless service.”

Littrell, born in October 1944, is a retired United States Army Command sergeant major who, while a sergeant first class, served as an adviser to the Army of the Republic of Vietnam’s Ranger units during the Vietnam War.

Between April 4 and April 8, 1970, Littrell’s battalion came under intense mortar attack. All advisers except Littrell were killed.

Unrelentingly, over four days, Littrell kept the battalion inspired, while he directed artillery and air support, distributed ammunition, strengthened faltering defenses, cared for the wounded and shouted encouragement to the Vietnamese in their own language. For his “sustained extraordinary courage and selflessness,” he was awarded the Medal of Honor.

This medal was presented to Littrell in a White House ceremony by President Richard Nixon in 1973.

Those driving by the Buddy Holly Center, 1801 Crickets Ave., on Thursday evenings have grown accustomed to seeing full parking lots and lots of smiling people.

Summer Showcases rarely find fans even taking time to head home and freshen up after work. Many, in fact, make a point of arriving as early as possible to grab preferred seating.

Mike Pritchard, one of Lubbock’s more popular musical artists, will perform rock ‘n roll and rhythm ’n’ blues from 5:30 p.m. to 7:30 p.m. Thursday outdoors in the Meadows Courtyard, where new brick was laid earlier this year next to the Buddy Holly Center, 1801 Crickets Ave. Publicity did not state whether Pritchard will perform as a solo artist or with one of his gifted bands.

There is no admission charge. No outside beverages are allowed, but each Thursday finds food trucks and a cash bar open on site.