Maybe it’s time to be skeptical of the skeptics.

Drew, the Genetically Modified Skeptic, posted a video on YouTube in which he debunks certain comments of Amani Al-Khatahtbeh (seen in photo above).  The title of his video is: Muslim Feminist Accidentally Discredits Islam.

Drew McCoy (who normally just goes by the name Drew) is a new atheist – meaning he believes in publicly confronting religion rather than tolerating it.  Al-Khatahtbeh is an author, feminist and a promoter if not something of an apologist for Islam.

I also have a problem with modern American feminism.  I think it has degenerated into something vile and unhelpful. 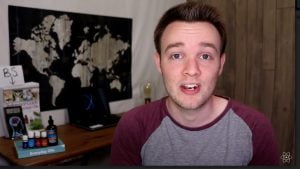 I also have a problem with the Genetically Modified Skeptic (seen in photo above). But on this one occasion, I clicked on the video thinking maybe just this once I could agree with GMS.

Nope. It wasn’t meant to be.

GMS plays a quote from Al-Khatahtbeh that says in part, “Islam literally founded the principles of gender equality that we call feminism.”

He starts out well enough by pointing out Egypt had rights for women and women leaders long before Islam existed.

He starts off well enough by pointing out Egypt had rights for women and women leaders long before Islam existed.  So far, so good.

He points out Al-Khatahtbeh has taken an interpretation of Islam that runs directly counter to several verses in the Quran.  So far, so good.

Then, six minutes into the video, he picks up the phone to call his friend Steve from another YouTube channel, Rationality Rules. It’s a WWE moment to say the least.

Right after the tag, Steve verbally does all the body slam moves on Al-Khatahtbeh you might expect complete with the WWE hairdo. The only things missing are Vince McMahon and a rowdy crowd. Steve then tags Drew and then, well, let the preplanned outcome for our entertainment continue.

I’m just saying they conducted themselves as mean-spirited jackasses.

I’ll take my lumps for saying that; you can count on it. These two gentlemen have followings on YouTube and I just voluntarily put a target on my back.

I have not seen all of GMS’s videos by a long shot, but I have seen enough to know he likes to fancy himself as a former Baptist. Drew, if I can call you Drew, we have the same Baptist upbringing.  That means, Drew, you and I have a certain understanding in common.

We both understand Jesus taught us to care for the sick, visit those in prison, feed the hungry, be generous to the poor, practice forgiveness, love your neighbor, don’t be a hypocrite and clothe the naked.

Al-Khatahtbeh is ideologically naked. No, I’m not saying she showed skin. Quite the contrary, she was covered from head to toe in modest clothing. But her ideas are the metaphorical equivalent of a naked person stranded in a deadly cold blizzard.

A tiny touch of compassion goes a long way here.

Drew, you are absolutely right to point out Al-Khatahtbeh has engaged in fallicy. You are not right to do it in a way that holds her up to be scorned and verbally beaten in the public square. A tiny touch of compassion goes a long way here.

This is a time in which many people worldwide have put their lives at risk to call upon Islam for reform. I do not know if Al-Khatahtbeh intended to put her life at risk in order to pave the way for reform, but she has indeed put her life at risk. There are now certain Islamic countries wherein she cannot safely go without the risk of assault, death threats or actual death.

Fallacy or not, she has done a brave thing.  It’s a thing I believe gives other Muslim women an example to be brave and consider speaking out. Reform of Islam that includes better treatment of women would be a good thing in my opinion.

In my opinion, which counts for nothing, the video could have been eight minutes, done without the WWE tag team approach and could have left room for other women within Islam to also come forward.

My words should not be taken as the practice of political correctness. I’m not saying Al-Khatahtbeh gets a free pass based on some religious or gender identity.

Yes, rationality is good. But so is compassion. So is the idea of let the punishment fit the crime. That didn’t happen in your video. Maybe the next one will be better. I sincerely wish you all the best.

Jacob Lever is a pseudonym for an independent columnist for Lubbock Lights. He loves Lubbock, his wife & kids, Jesus and a long list of other people. The original Jacob struggled with God and refused to let go until he could get a blessing. Sometimes that's how life is. Jacob believes that political correctness is deceitful and damaging. His political philosophy is best described as a small-government conservative.