I’ll never forget walking into the newsroom at the Elkhart Truth 17 years ago today and watching a plane fly into one of the World Trade Center towers.

I asked what was going on and the managing editor said, “That’s the second plane.”

Our nation and world changed that day.

Our nation and world changed that day.

Somewhere in the next few days, I said there are three things America needed to do.

We’ve made great progress on the first two  and I never complain about airport security. Yes, there are some horror stories about TSA incidents at airports, but some government official in Washington did not create the need for TSA.

We also saw the growth of the Islamic State and we’ve made progress against them.

My friend Matt Crow posted this on Facebook today and it speaks so well to my previous points and gives well-deserved credit to President George W. Bush.

‘Everything will be all right … Because our president is a Texan.’

“A few days after the attacks I was in a small restaurant in Alexandria, waiting for a table. I overheard a young couple talking about what had happened. The lady remarked that ‘everything will be all right.’ I asked he how she knew that and she replied ‘Because our President is a Texan.’ As it turned out, she was right. While other men might have hesitated or waited for polling data, George W. Bush initiated combat operations almost immediately. Little by little, our country’s men and women in uniform – and some without uniforms, have continued to successfully beat back the evil we all experienced 17 years ago.”

But there are still too many people in the Muslim world who want to carry out barbaric acts against us and many more who think that’s acceptable.

Many poor people in Muslim nations believe this because terrorists use the affluence in America as one of the reasons for their despicable acts.

And when you’re poor … a lot worse off than many poor Americans … you want to blame somebody.

That’s where we need to find a way to get to those people, even if it takes generations.

The War on Terror will not have an end date in my lifetime … no matter how many people think we need to stop rooting out these vermin because it costs too much, or because we’ve “won.”

I visited the  National September 11 Memorial & Museum five years ago in Manhattan.

It also remembers those killed at the Pentagon and the heroes of Flight 93 which crashed in Pennsylvania.

A couple of things struck me.

The names on the memorial are not a bunch of white Anglo-Protestant names.

There were many, many more … including women and their unborn children.

I was there Father’s Day weekend.

A young woman taped a note near her dad’s name:

I think that you’ve been missing out on a lot. I’m taller than mom now (even though she might deny it).

I think I found a new hobby … needle felting. It’s really painful, since I’m a beginner, I keep hurting myself, but fun nonetheless. Imade you something for Father’s Day! I hope you like it.”

Think about all those names … it tells me the American dream is alive and strong around the world. Whether some of those victims are first generation Americans or their families have been here for many generations, they came to America for a better life, like my ancestors.

And that threatens evil people who want to impose their twisted views of society on others and will do anything to hold onto their power.

The War on Terror will end when all Muslims catch a piece of that dream, don’t see us as the enemy and come together to root out the final pieces of scum from their world.

I just pray it happens in someone’s lifetime. 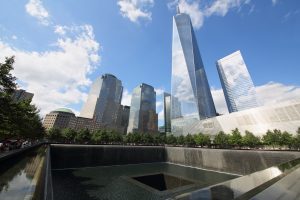