There is a Facebook page about Lubbock memories.  Last week someone posted an old ad from The Seafood Shop on that page.

I was surprised to see how many people not only remembered this restaurant, but how many considered it an important personal memory and knew and loved the family that opened and owned the shop in the 1950s through the 1970s.

As a teenager needing a job for a work program at school, I had been looking around Lubbock during that summer of 1972 for a good place to work.  The new South Plains Mall was opening and there were a lot of entry jobs available in the retail business.  But somehow, none of them seemed right for me.  That’s when I stopped at the Seafood Shop to inquire about a job.  The shop was located at 3040 34th street, current location of The Lone Star Oyster Bar.

I interviewed for general restaurant work, waiting on the counter when needed, but mostly I would be doing prep and cooking.  Since I love to cook, I decided this was the perfect job for me.  I went to work on September 1, 1972 for $1.40 per hour.  Minimum wage at the time was $1.60, but restaurants and movie theaters were exempt from minimum wage for teenage workers.

The shop manager at the time was Bob Beard, from Amarillo.  The Morrows, who opened and had owned the shop for many years, had sold the shop to an Amarillo interest and had moved to the DFW area to begin a chain of Seafood Shops there.

The first thing Norman did was raise my hourly wage to $1.85, more than minimum! 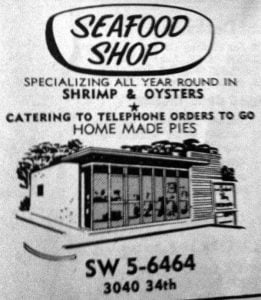 I had worked there for a few months when Norman Morrow and his wife Frances moved back to Lubbock and took back ownership of The Seafood Shop.  Their kids, Jerry, Larry, Phil and Debbie stayed in Dallas to manage the family interests there.  The first thing Norman did was raise my hourly wage to $1.85, more than minimum!  That was his style.  Other employees have similar stories.

The Morrow family was well known in Lubbock.  And no wonder, they basically treated everyone like family.  It seems like everyone patronized The Seafood Shop and usually spent some time visiting with Norman and Frances as they were always available for a visit.  Buddy Holly’s parents used to come by regularly, visit with Norman and pick up some great seafood.

Buddy Holly’s parents used to come by regularly, visit with Norman and pick up some great seafood.

The Seafood Shop was known for the friendly atmosphere and conversation from the Morrows, but also for the high-quality food.  Everything was made from scratch.  We peeled the potatoes and sliced them for French fries, we hand cut and breaded the fish, hand peeled and breaded shrimp and we made our own slaw dressing, cocktail sauce and tartar sauce. We even made the mayonnaise for the tartar sauce and slaw dressing!

Obviously, there was a great deal of labor involved.  In today’s marketplace a restaurant involved with that much intensive labor could not exist.  But it was a simpler time.  Quality did not come cheap, but it was still affordable, and people loved it.

Before long, Phil and Debbie also moved back and worked with us at the shop.  They were great friends and always ready to assist in any way they could.  The other brothers, Larry and Jerry continued to pursue restaurant interests in DFW and Lubbock.  Sadly, only Larry and Debbie are still with us today, the rest of the family have passed.

Our pie ladies, Clara and Phyllis, put a lot of love into their pies.

One memory mentioned repeatedly on that Facebook post last week was the wonderful home-made pies.  Our pie ladies, Clara and Phyllis, put a lot of love into their pies.  The shop carried an extensive line of pies. The most popular were Buttermilk Chess, Lemon Chess, Coconut Chess, Pecan, Apple, Apricot and, at the holidays, Pumpkin.  We also made Key Lime, Strawberry and Chocolate during the summer months.

During Thanksgiving and Christmas, the pie orders were stacked all over that small shop.  People would call in orders for multiple pies weeks in advance and pick them up the day before the holiday.  It was great fun working those days with all the holiday excitement.  At New Year’s, we prepared hundreds of pounds of cocktail shrimp and sauce for the New Year parties.  Great memories.

The Morrows were like second parents to me.  Always supportive and always available to talk to.  I had the pleasure of working for them at The Seafood Shop through high school and college.  The Morrows attended each graduation, cheered me on and gave me a graduation gift.  They were great people. I truly miss them and those good ole days.

(In photo below, Russell Hill at the Seafood Shop with a co-worker.) 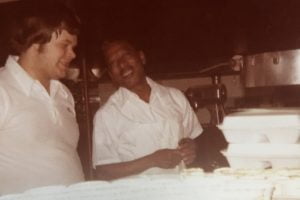