It’s Independence Day weekend, time for concerts, cookouts, fireworks, parades and fun.  More important, it’s a time for all Americans to reflect on our history and celebrate our freedom and independence. It’s a time to be proud of our heritage and our culture.  It’s a time to remember the great people and events of our past and to contemplate what great things we can achieve in the future.

Sadly, our history has been under attack recently.  Certain groups have decided it’s to their political advantage to change our history, to re-write our story to suit their agenda.  Identity politics of the modern age seeks to affix blame to modern generations for events and attitudes from previous generations of Americans.

“Every record has been destroyed or falsified, every book rewritten, every picture has been repainted, every statue and street building has been renamed, every date has been altered. And the process is continuing day by day and minute by minute. History has stopped. Nothing exists except an endless present in which the Party is always right.”

The love of America was ingrained in me at an early age. I know my relatives who are no longer with us would be horrified at what they would see and hear today.

I come from a family of teachers.  My father, all four grandparents, numerous aunts, uncles and cousins have been teachers.  My wife and I are teachers.  I was brought up to respect and love American values, American tradition and American history. The love of America was ingrained into me at an early age.  I know my relatives who are no longer with us would be horrified at what they would see and hear today.

The removal of statues, changing of holiday names, removal of names of Founding Fathers from institutions, the disrespect for law enforcement, disrespect for our flag, vandalizing of monuments, attacks on our political system and laws (ie: Electoral College, illegal immigration, Second Amendment, First Amendment, etc.) are all recent examples of how some groups now hate America.  They actually hate the country that gives them the freedom and right to speak out.  These groups represent a minority but have gained notice since they seem to have the blessing of many in the Democrat party and in the media. They are just as wrong as they have always been. 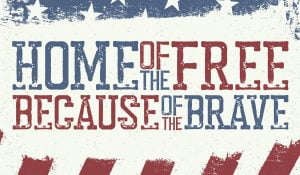 The latest in this onslaught is the asinine assertion the Betsy Ross flag of 1775 is akin to the swastika or the KKK burning of crosses.  Excuse me?  Where in the world did this notion come from?  Do these people just make things up to see if they will get traction in the press?  The so called “professor” who made this outrageous statement cannot back up these assertions.  I won’t add to his publicity stunt by mentioning his name here.

How did these ‘progressives’ attach white supremacy and racism to everything in our history?

How in the world did these “progressives” attach white supremacy and racism to everything in our history?  It is true; America was once a racist society.  Most societies were in the 19th century.  But that has changed over time.  It has changed drastically.  And applying modern thought to historic people and events is ludicrous.  Time moves on, people evolve, societies change.  I wonder if this “professor” realizes the colonists were fighting for his freedom?  That many, many blacks also fought under that flag for the freedom of America?  I wonder if he even knows what that war was about or who we were fighting?

A similar instance is the recent talk about “reparations” for slavery.  The Democrats want to force reparations on Americans for what happened more than 150 years ago.  But this argument is so full of holes I don’t believe it will go anywhere, even in their fantasy world.  Who would pay these “reparations”?  How many of us have any ancestors who actually owned any slaves?  What about the descendants of the Union soldiers who died to free the slaves?  Do they owe too, just because they are white? And how are they supposed to determine who exactly are “owed” these payments?  How much should they be?  How will this “correct” the sin of the past?  Should black Americans also pay reparations to Native Americans and Japanese Americans? Our country continues efforts to help all Americans of any ethnic background to be successful. But to think it’s possible to assign an arbitrary monetary value to the sins of America’s past to people who weren’t even here is beyond ridiculous, but potentially valuable to Democrats seeking votes.

The Democrats are beginning to feel the loss of their “grip” on the black and minority vote.  Decades of liberal policies have made situations much worse for these groups and they are beginning to see  there are better alternatives than always being a victim and attaching blame to others.  In my opinion, the Democrats have carefully formulated a plan to attack our history in an effort to try to maintain and regain minority votes.  Their brand of identity politics is all about victimhood and always, always about race, especially where it doesn’t exist.

Their brand of identity politics is all about victimhood …

Racism is a very real and an ugly part of American history.  That’s an undisputed fact.  There are still people with racist beliefs. But holding large groups of people accountable for things that happened in the past is ridiculous.  And when you hear a Democrat screaming about racism or white supremacy, it generally means they have no meaningful thoughts, they have lost the argument.

They are aided in this strategy by the simple fact many Americans, especially younger Americans, do not know our history.  They believe whatever they are told, making them easy to sway.  If you have seen any “man on the street” interviews in recent years, you know exactly what I am talking about.

Erasing our history does not change it.  It’s important for us to remember our past, especially the mistakes of our past, so we do not repeat them.  We have some terrible episodes in our history with slavery, Native Americans, the Japanese, etc.  But we should not forget them and certainly never repeat them.  What makes us great is our ability and willingness to correct our mistakes and create opportunity and freedom for all.  And modern Americans surely should not be held responsible for things they had absolutely nothing to do with.

America is an exceptional country with exceptional people, who will die for the rights and freedoms of others.  Let’s not let liberal revisionists change our history or our exceptionalism.

So enjoy the holiday, have fun with your family and be very proud to be an American. Happy Birthday America!