Latest News
Donald Trump will never be silenced, but he cannot be part of the Republican Party’s futurePlease stop reminding me to vote because I did … go prod some twits who don’t think it’s worth their timeWill the real Dan Pope please stand up? An aspirational endorsementWe cannot stop mail-in voting, but it’s a terrible idea with so many opportunities for fraudThis election comes down to freedom and Democrats want to take yours away

Watching social media about this is frustratingly predictable. Friends who I know are liberal or conservative, with little exception, believe one or the other based on their political beliefs.

… can any of you prove your belief is the truth about what happened?

But let’s get one thing clear. Whether you believe Kavanaugh or Ford, you are welcome to your opinion … but can any of you prove your belief is the truth about what happened?

You were not there.

No. And don’t even try to tell me you know what happened. You were not there.

If you’re a woman who’s been a victim of sexual harassment … from light-hearted uncomfortable flirting to felony sexual assault, you might be more willing to believe her. I respect that and am sorry for what happened to you.

But does that mean … in this specific case … Brett Kavanaugh did sexually assault her?

We’ve come part way in our country in addressing this issue. For way too long, women didn’t always report sex assaults and when they did, they were not always believed.

At the first newspaper  I worked for in the late 1970s, there were calendars with naked women back in the press area. No one seemed to be offended. Or, if they were, no one said anything.

Going further back, there’s a scene in 1946’s “The Big Sleep” … one of my favorite Humphrey Bogart movies … where Lauren Bacall (seen in photo with her children with Bogart) sings a song about a man who “socked her in the choppers.” It’s clear during other lines he’s not nice, but the song makes it seem as if this is just the way it is and it’s OK. 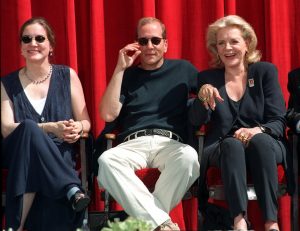 I hope the Me Too Movement has finally made men aware that some things they may have thought they could do with a woman are unacceptable.

I hope the Me Too Movement has finally made men aware some things they may have thought they could do with a woman are unacceptable.

But the Me Too Movement doesn’t mean every man accused of sexual impropriety actually did it.

But the Me Too Movement doesn’t mean every man accused of sexual impropriety actually did it.

We can’t lose sight of that … even though people I follow on Facebook with Trump Derangement Syndrome and MAGA-hat wearers have.

I do find it interesting  so many  of the worst cases of sexual harassment/assault come from the entertainment industry, which is so heavily liberal.

I have no idea if Brett Kavanaugh sexually assaulted Christine Blasey Ford all those years ago. If this new FBI investigation shows he did … then he’s gone and the Democrats and Republicans can fight over another nominee,

And yes, the Democrats are upset about Merrick Garland and Republicans are fuming after Thursday.

We’re not here yet, but I hope we’re getting to a place where: