Republican malcontent state representative Lyle Larson (R-San Antonio) just published to Twitter an editorial in the Galveston County Daily News under the headline We Need to Get Rid of the Two Party System. And while it wouldn’t merit notice ordinarily, as not much attention is usually paid to a state rep’s op-ed pieces, this one comes at a time when the Republican Party of Texas has just elected a new leader, Allen West. West ran on a platform of party discipline and adherence to conservative principles and Larson’s column is a Fort Sumter-style rebellion.

It is the new chairman’s first test, and West may only ignore it at his peril.

Here’s what you need to know.

In his column Larson argues “Finally, to allow newly created political parties to flourish, we should consider shifting our government to a parliamentary system. The partisan polarization that has eroded many citizens’ faith in government could be replaced with the means to create coalition governing.”

It is not necessary to debate the profundity of his stupidity in order to meet Larson’s argument head-on.

It’s odd that Larson, who is best described as “notoriously ill-tempered,” is railing against the polarization he has been a venomous participant in for nearly a decade. One might venture to guess that Larson is still stinging because his moderate friends performed so poorly in the March primaries as motive for his railing against the system he has manipulated so skillfully to his own benefit. 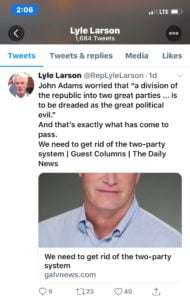 Larson never suggests how to manage the complete abolition of our constitutional republic nor does he call for a constitutional convention, which is the only way to accomplish his absurd proposal. But it is not necessary to debate the profundity of his stupidity in order to meet Larson’s argument head-on because his commentary isn’t serious, except as a serious way to introduce his idea of a centrist’s political nirvana.

There’s no right and wrong for Larson, only smooth swimming in the swamp.

Larson puts it this way:

One day a “Texas Independent Party” may flourish from a centrist ideology that focuses on fiscal issues and core government responsibilities such as education, health care, infrastructure and public safety. The Texas Independent Party could balance out the fractious far left and right leanings of the incumbent parties.

And here we find Larson at his most honest, if not also his most disingenuous. Larson’s ideology is raw power and what he can gain from it. Conflict, debate and scrutiny do not benefit him. Larson is the malevolent opposite of an ideologue. His favored system of government operates best when no one is critical of the other. There’s no right and wrong for Larson, only smooth swimming in the swamp.

This Mitt Romney of the Texas House is finished with the Republican Party because he eschews pro-life, Second Amendment and property tax reform bills. And the last thing Larson wants is to ban taxpayer funded lobbying. There’s too much money in it.

All of which prompts us to ask, does the representative from San Antonio want to tear down the old system? Or is he testing the waters for a new party?

Instead of fuming about Governor Greg Abbott’s decisions made in the moment, something the legislature will do in its time, let Chairman West direct his attention to the bad actors within the party who ought to be banned from a Republican ballot.

I was curious what our legislators thought about Larson’s call to abandon the two-party system and here’s what I found:

“At a time when there has never been a more divided nation with respect to politics, religion, economic and social issues, it is reasonable to understand the misguided appeal to eliminating the party system. I wish it could be that simple. These divisions have existed since this country’s inception. The difference today is that the desire to unite on things in common to work out those divisions no longer exists.  It is the people that you get rid of not the system. Unfortunately, it is harder and harder to find people that even understand the basic tenants of our Constitutional Republic.  These days should not be surprising.  Our founders warned of the days we are in. Our Republic is only viable when moral, educated and engaged people govern themselves.

“The naivety that only if there were no formal process discounts the fundamental freedoms that create the very reason for a process to protect those freedoms.  The filtering process through a primary system gives people of like minds a process to vet the people.  Unfortunately, it is the only real opportunity to vet that person.  Secondly, I believe the frustration isn’t with the system and much as the process.  If campaign finance is the barrier that keeps people out, then it is that discussion.

“Having a ‘free-for-all system’ in a ‘general’ would work if there were assurances of basic understanding of nonnegotiables regarding who we are as a nation. Recent events shows this is not the case.

“A system is as only good as the people in it.”

“The federal government is locked down and full of partisan gridlock. I much prefer the way our system works in Texas. The Legislature in Texas has to work together since our Texas Constitution mandates we have a balanced budget every session.  I am a proud Texas Republican.”

“I am proud to be a Republican and share its conservative philosophy.  If the representative from San Antonio hates the Republican party this much then he should put his money where is mouth is, resign as the party nominee and run as an independent or write in.”

And some pragmatic words from Thomas Jefferson at the end of his life:

“Men by their constitutions are naturally divided into two parties. 1. those who fear and distrust the people, and wish to draw all powers from them into the hands of the higher classes. 2. those who identify themselves with the people, have confidence in them cherish and consider them as the most honest & safe, altho’ not the most wise depository of the public interests.” (letter to Henry Lee, August 10, 1824)