With the arrival of September, there are increased opportunities to enjoy the arts – literally in the form of First Friday Art Trail, but also two theater companies opening new productions and a celebration of what would have been Lubbock icon Buddy Holly’s 83rd birthday … had he lived.

That said, expect additional thousands all weekend at the Lubbock Memorial Civic Center, 1501 Mac Davis Lane, site of the 31st-annual National Cowboy Symposium and Celebration from 9 a.m. to 7 p.m. Friday and Saturday and 7:30 a.m. to 10 a.m. on Sunday.

The Parade of the Horse is at 10 a.m. Saturday.

And keep reading for more of this weekend’s Best Bets:

This is an evening of stories and songs celebrating the heart and soul of music, namely songwriting.

The evening is presented by the Lubbock Entertainment and Performing Arts Association, aka LEPAA, in partnership with the Buddy Holly Educational Foundation and Texas Heritage Songwriters’ Association. Headlining this first in what is expected to become an annual event are singer-songwriters Joe Ely, Kimmie Rhodes and Alejandro Escovedo.

Tickets are $40 on the first five rows (temporary seating in a front row called A-1, and permanent rows A, B, C and D). Tickets are $35 for remaining floor seats, and $30 for standard balcony seating. Balcony box seats are $70 and include free concessions.

Cactus ticket prices listed above are all “base prices,” varied fees and tax always will be added to base prices at time of purchase. Tickets can be purchased in advance online at cactustheater.com.

This concert marks the end of the inaugural five-day Buddy Holly Songwriters Retreat.

During this week-long retreat, writers break up into small groups to collaborate through the creative process of songwriting. Each evening, the groups return, share a meal and then share songs written during the day. At the end of the week, best-of-the-best songs written during the week are presented during Friday’s Buddy Holly Songwriters Showcase.

The mission of the retreat is to cultivate aspiring songwriters through sights, landscapes and the West Texas culture that inspired Buddy Holly. At the end of the retreat, participants will have collaborated with mentors and peers to further refine their songwriting creative process.

Texas native Alejandro Escovedo’s new album, “The Crossing,” is about his journey of crossing borders, jumping barriers and taking risks. It ranges from orchestral numbers to classic rock and bursts of 1970s punk. 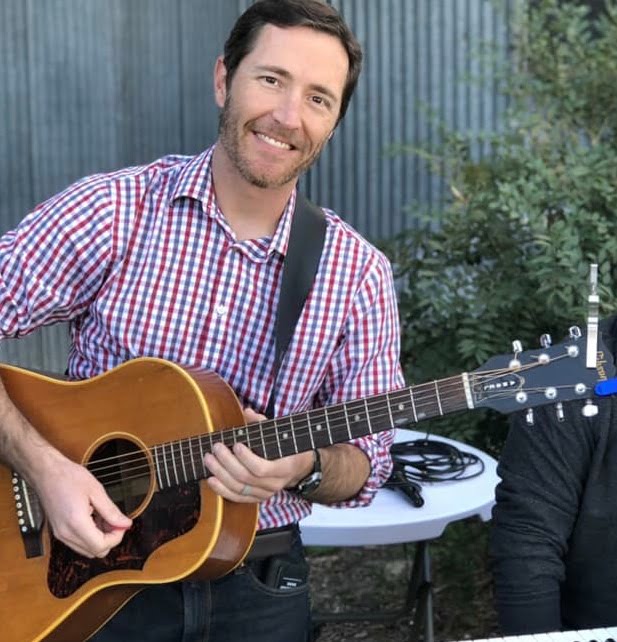 Had he lived, Charles Hardin Holley, nicknamed Buddy by his mom, would be celebrating his 83rd birthday on Saturday, Sept. 7. Fans will have plenty of time to pay tribute to him Saturday with a visit to the Buddy Holly Center, 1801 Crickets Ave.

The center will be open from 10 a.m. to 5 p.m. Saturday, with free admission all day.

Note this also provides plenty of time for visitors to Lubbock to have fun at the Buddy Holly Center and still make it to the Texas Tech vs.UTEP football game at 7 p.m.

But be sure to take time out to visit the Allison house. The City of Lubbock did not save Buddy Holly’s historic family home. But the history of Buddy Holly & The Crickets can be felt within the childhood home of Holly’s best friend and Crickets drummer Jerry “J.I.” Allison.

The small home was moved to the south side of the Buddy Holly Center and placed on permanent display.

Recall that Buddy and Jerry spent a Saturday afternoon in 1956 watching the John Wayne/John Ford western classic “The Searchers” at a downtown Lubbock movie theater. Buddy was inspired by the line Wayne repeated in the film: “That’ll be the day.”

So the teenaged Holly and Allison returned afterward to Allison’s family home and, in the drummer’s bedroom, devoted the rest of the day to writing the hit song that opened an international career for Holly: “That’ll Be The Day.”

Musical history resides in that room to this day.

Note that the Allison house will be open at no charge only until 2 p.m. Saturday.

Other offerings Saturday at the Buddy Holly Center: 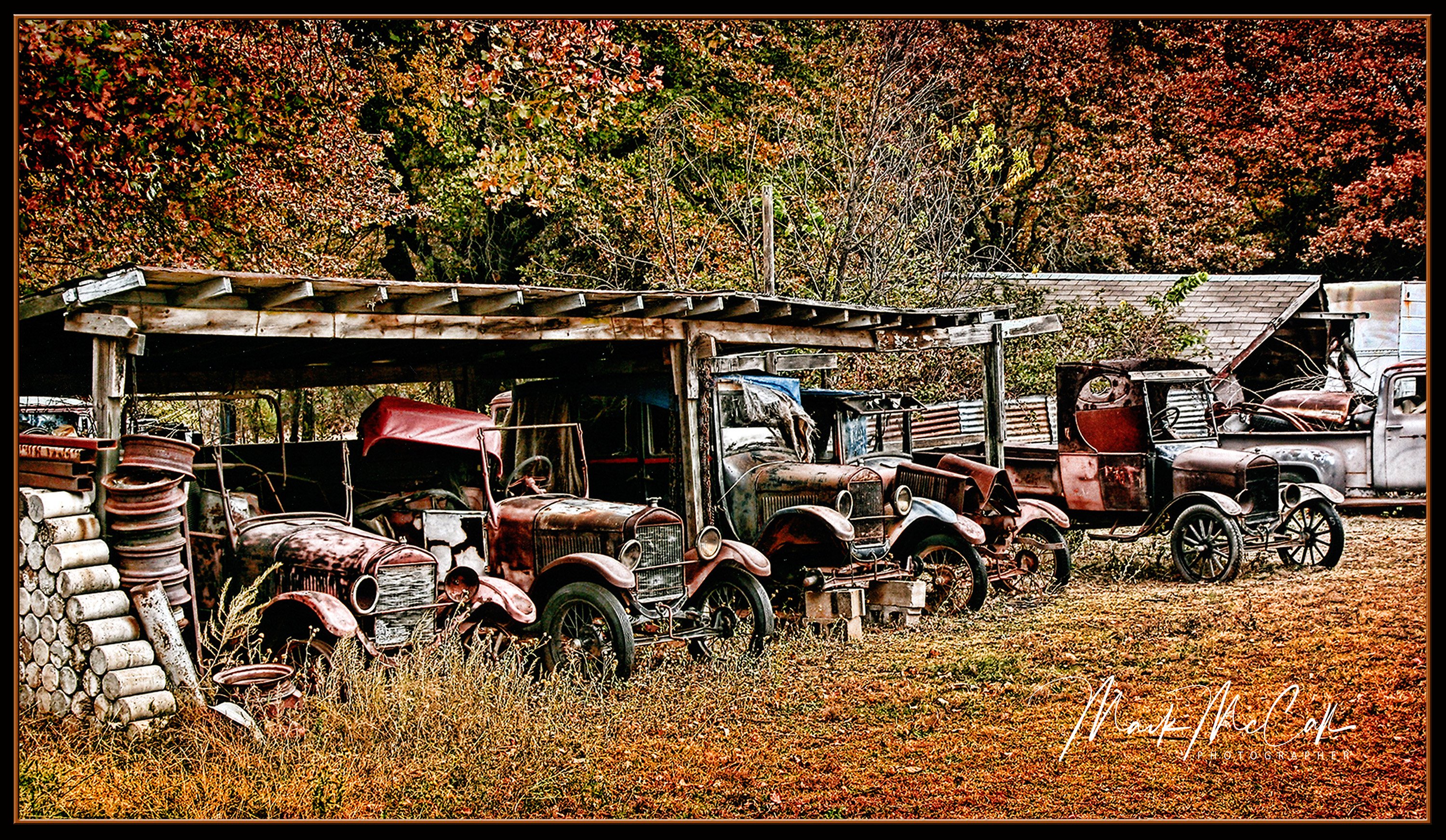 By now, the public has grown to expect heavy traffic – including heavy foot traffic – headed toward LHUCA, 511 Ave. K, before 6 p.m. on the first Friday of every month.

Although art lovers could begin their venture at nearly 20 participating venues, it seems thousands opt to head to LHUCA as a first stop for Lubbock’s monthly First Friday Art Trail.

The 180th non-consecutive First Friday Art Trail takes place from 6-9 p.m. on Friday, Sept. 6. There’s no admission charge and those curious about participating venues and which artists are represented at those venues, should visit ffat.org online.

Visitors have a decision to make regarding transport. There are galleries inside and near LHUCA, for those who prefer just hanging out in that vicinity.

Visitors can, of course, use their own cars to visit favored venues.

Or they can take advantage of Friday’s five Art Trail Trolleys, all of which will depart at 6:15 p.m. Friday from the Charles Adams Gallery, 602 Ave. J.

This weekend marks the anniversary of Buddy Holly’s birthday. 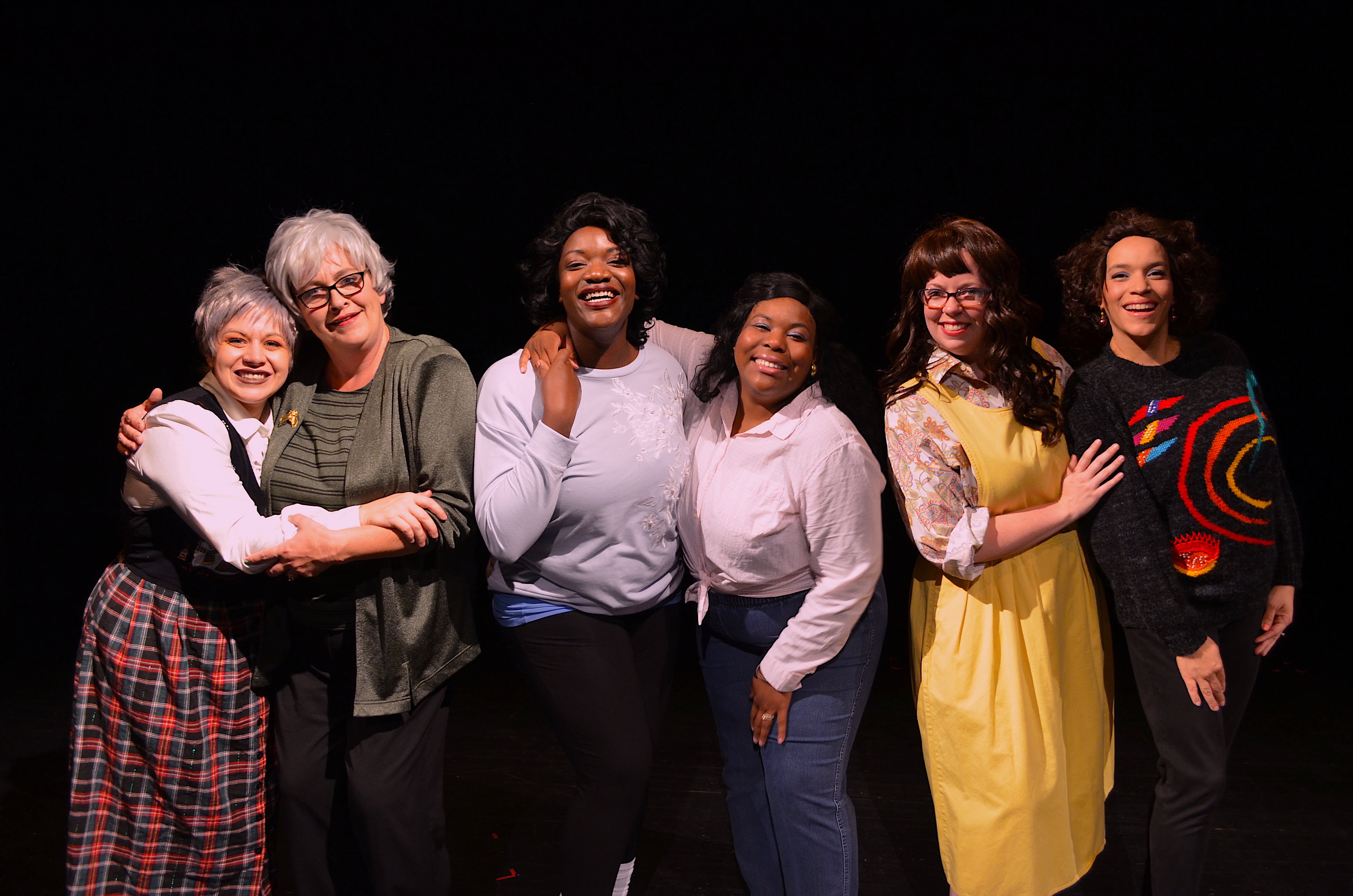 Certainly by popular demand, making its return to Lubbock the next two weekends is Robert Harling’s 1987 play “Steel Magnolias.” Produced by non-profit Will of the Wind Productions, the play, directed by Joshua Aguirre, will be staged in the Firehouse Theatre at LHUCA, 511 Ave. K.

Tickets for all ages are $22.75, which includes all fees and taxes. Discounts are available for groups of 10 or more.

Tickets can be purchased in advance online at willofthewind.org.

The play opens with a discussion of Shelby’s future wedding in the fictional northwestern Louisiana parish of Chinquapin. The six women gather regularly at Truvy’s in-home beauty parlor. Events over the next three years include Shelby dealing with her Type 1 Diabetes; the women interact in varied ways, but remain friends.

While the main story line focuses on Shelby and her mother, M’Lynn, the underlying friendship shared by all six women is prominent throughout the drama.

The title suggests females in the South are as delicate as magnolias, but as tough as steel.

Many no doubt were introduced to “Steel Magnolias” via the 1989 film adaptation, starring Julia Roberts as Shelby and Sally Field cast as her mother.

Fewer know the play is based on playwright Harling’s attempt to deal with the death of his sister, Susan Harling-Robinson in 1985 from diabetic complications after the birth of his nephew and the failure of a kidney donated by a family member. 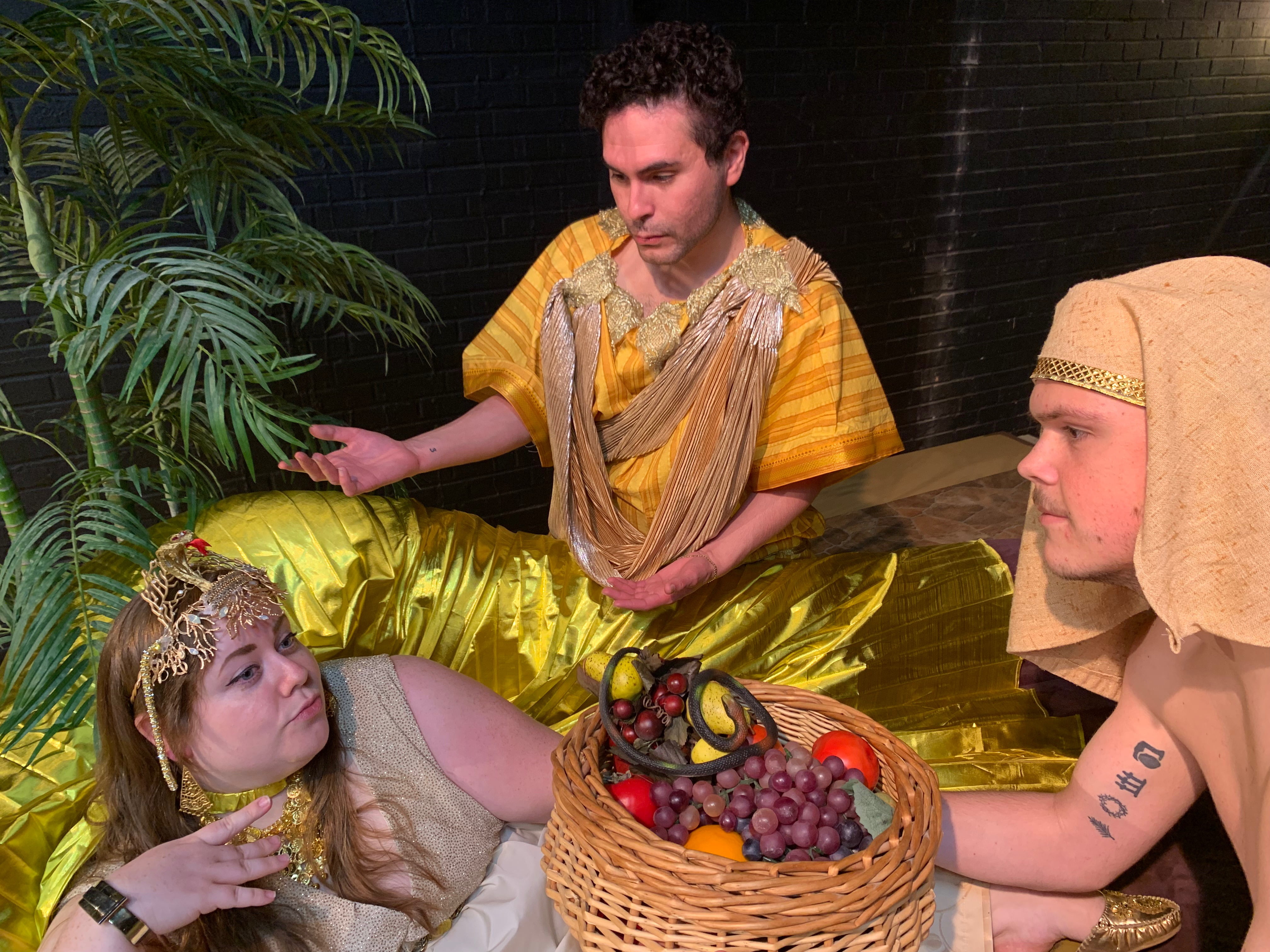 The Queen (Emily Healy) doesn’t see the snake in the fruit which she is being offered by the queen’s attendant (Nick Muniz) and her slave (Garrett Benson) while filming their Epic movie “Exeunt Omnes.”

The Lubbock debut of comedy “Epic Proportions,” written by Larry Cohen and David Crane, will be staged at 7:30 p.m. Friday and Saturday and again at 2:30 p.m. Sunday at Lubbock Community Theater, 4230 Boston Ave.

Reserved seats are $20 for the general public and $15 for students and seniors.

Direction is by K. Douglas McKennon.

Set in the 1930s, the play tells the story of brothers Benny and Phil, both of whom go to the Arizona desert to work as extras in the epic Biblical film “Exeunt Omnes” (Latin for “Everybody Out”). Phil is a former high school band director, while Benny has fantasized about being a Hollywood star.

The film is directed by the mysterious and reclusive D.W. DeWitt.

More than 3,000 extras are supervised by Louise Goldman, who divides them into groups by asking them to count off by four.

Phil’s experiences as a “Three” include relatively pleasant scenes, including feasts and parades.

His brother, Benny, is a “Four” and winds up being included in all 10 plagues.

As things progress and the movie begins to fall apart, Phil finds himself working behind the camera as the film’s director and Benny winds up in a starring role.

Both men fall in love with Louise, leading to a brother vs. brother rivalry typical of epic movies.

Along the way there are gladiator battles, the previously mentioned 10 plagues – and a cast of thousands portrayed by a few other actors.