This week’s recommended attractions are varied, ranging from a free outdoor movie for the entire family to an original play taken away from the traditional stage to be performed by Renegade Productions at the Sun ‘n Fun pool. This story focuses on adult emotions.

Also available this weekend are an Elvis tribute by the touring Blackwood Brothers Quartet and a late night Saturday appearance by the popular band Hogg Maulies.

‘The Gospel Side of Elvis,’ by the touring Fabulous Blackwood Brothers Quartet

James Blackwood, the final founding member of the Blackwood Brothers gospel quartet, died from complications of a stroke in 2002 in Memphis.

That said, the band’s heritage lives on. In 2012, Mark Blackwood, grandson of the late R.W. Blackwood,  formed the Fabulous Blackwood Quartet (seen in photo above). And a portion of the legendary quartet’s heritage is comprised of gospel songs recorded with Elvis Presley.

On Friday, Aug. 16 – the 42nd anniversary of Presley’s death – the touring Fabulous Blackwood Quartet will perform gospel songs once also graced by Presley’s voice in a concert at 7:30 p.m. at the Cactus Theater, 1812 Buddy Holly Ave.

Reserved seats are $25 for the first four rows (A-D) and $20 for the remainder of the floor seats and standard balcony seating. Limited reserved seating in balcony box seats are $50 and include free concessions throughout the concert.

So who will fans be listening to? Today’s Blackwood Brothers Quartet includes the following four voices:

Note: At the Cactus Theater, all sales are final. The Cactus does not permit exchanges, refunds or credit for future shows in exchange for unused tickets.

Lone Star Music defines the Lubbock-based Hogg Maulies – Rode Morrow, Craig Tally, Casey Maines and Jason Newton – as “one of the bands playing a distinct role in the Texas Music movement over the past years, especially so in the West Texas region.”

“Drawing from a number of different influences and experiences, as well as staying true to an appreciation of all genres of music, Hogg Maulies altogether has created a unique blend of sound and style anyone can relate to,” the writer said.

I also found it interesting that, during an interview with WestTexasSweetheart.com, band leader Rode Morrow cited a number of musical influences and then was asked to name his favorite musicians.

“The guys in my band. They’re all extremely talented. I’ve got a great group and don’t mind bragging about them. If you have not seen us play, then you’re missing out. … I’m really lucky to have all of them,” Morrow said.

Speaking of Blue Light Live, Morrow told another interviewer it’s become a “second home” for the Hogg Maulies. They appreciate the venue’s high standards and know that many great musicians favor the Blue Light.

“That’s kind of our home base and made us who we are as musicians. There are a lot of great artists and musicians who play there. There’s also a lot of history in that place. … When you play at the Blue Light, you have to take your A-game because the bar is set really high there. It’s always really a great crowd,” said Morrow.

One of the more unique weekend attractions is the Red Raider Fandamonium, officially taking place from noon-8 p.m. on Saturday at the Sports Performance Center, 7 Akron Ave. on the Texas Tech campus.

Admission is free and parking is available in the commuter lots immediately east and west of Jones AT&T Stadium.

This will be the public’s first chance to meet the 2019 Texas Tech Red Raiders and Tech head football coach Matt Wells – but be aware Coach Wells and his team are not expected to show up until 7 p.m. Saturday for their hour-long autograph session and meet-and-greet.

The Red Raider volleyball team also will show up at 7 p.m.; the team has a table set aside for autographs and pictures.

So what happens during the first seven hours of Fandamonium? Quite a bit, actually.

The event finds Tech Athletics hosting its semi-annual garage sale from noon-8 p.m. with scores of game-worn and excess Under Armour T-shirts, shoes and equipment available for purchase. The garage sale is on the track side of the Sports Performance Center.

Live music and inflatable games also can be enjoyed during the entire event.

Tech Athletics will provide football and volleyball posters, along with schedule cards that can be used as autograph items.

Fans are asked to request only one autograph per person, so all visitors can be accommodated.

Contact the Texas Tech Promotions and Fan Engagement office at (806) 742-3355 for more information. 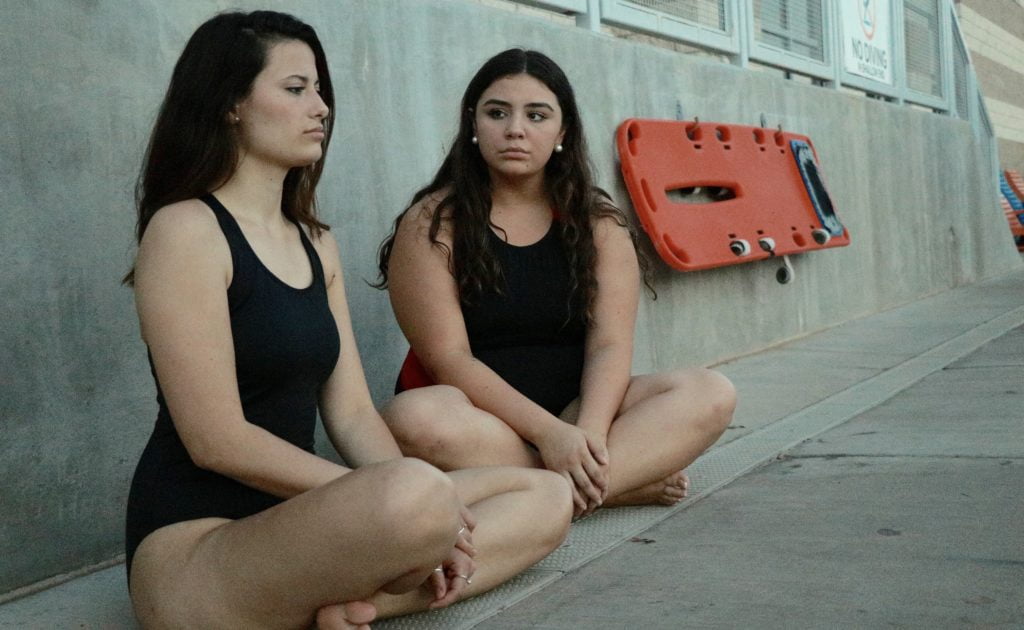 ‘What We Scream Underwater When No One Can Hear Us’

In partnership with the Lubbock YWCA, Renegade Theatre Productions will stage the drama “What We Scream Underwater When No One Can Hear Us” at 9 p.m. Friday through Sunday and again Aug. 23-25 at the Sun ‘n Fun swimming pool, 6204 Elgin Ave.

The play was written by Caitlin E. Turnage, an MFA student at Texas State University. Co-directors are Abigail Bugh and Emmalee Schooler.

The plot includes adult issues. Performances are recommended for those age 16 and older.

Stephanie Infante and Miera Garcia (in above photo) costar as Savannah and Georgia, respectively.

General admission seating is $15. Tickets can be purchased at the door and in advance online at bit.ly/WWSlbk.

Group discounts are available upon request.

Lindsay Ragner, the play’s producer, explained the drama is “written, led and told by women. With this production, Renegade Productions is working to embody the YWCA’s mission of eliminating racism, empowering women, and promoting peace, justice, freedom and dignity for all.

“The play centers around women discovering the strength to stand up for themselves and finally be heard. With this play, we hope to pay homage to the YWCA’s mission and provide a voice from an underrepresented community,” she added.

During the play, Savannah and Georgia meet at swim practice in their private pool. While Georgia openly embraces their connection, Savannah is terrified by it. Life continues to tear them apart, but, over and over, they are drawn to one another. The women gradually discover faith, love and the never-ending pull of the water.

“Never in my life did I think I would get to see Savannah and Georgia swim in an actual pool. This kind of work is begging to be taken out of the ‘traditional’ theater space, and I am so grateful that Renegade saw that in the narrative,” said playwright Turnage.

(It isn’t the first time. Renegade Productions partnered in May with Grace Campus, a transitional Lubbock homeless shelter, to bring Eugene O’Neill’s “The Hairy Ape” to campus clients and visitors.)

Glenda Mathis, YWCA executive director, said of her organization’s work with Renegade Productions: “This is an exciting collaboration with the performing arts. We are thrilled Sun ‘n Fun can be the backdrop for an important story about dignity, acceptance and the courage to explore fundamental life questions.”

Inclement weather forced a cancellation of one of the Parks & Recreation Department’s originally announced free outdoor movies in the parks.

Visitors are encouraged to bring blankets, lawn chairs, personal snacks and, of course, the entire family. Season sponsor Amerigroup will provide popcorn and cold bottled water, as well as games before the movie starts.

“Mary Poppins Returns” was directed by Rob Marshall, who also earned a Director’s Guild Award for his earlier direction of 2002’s “Chicago,” the first film musical to win an Oscar for Best Film since “Oliver” in 1968.

“Mary Poppins Returns” did not fare as well in terms of awards, although it earned almost universally positive reviews. Emily Blunt was applauded for her performance as Mary Poppins, a role played in the original 1964 Disney musical comedy by Julie Andrews.

The sequel is set in 1930s London, 25 years after the events of the 1964 film. This time Mary Poppins, the former nanny of Jane and Michael Banks, returns after a family tragedy.