I considered announcing Saturday’s cool Star Walk at Hodges Community Center and home games by the Texas Tech baseball team, trailing only the University of Florida in the national rankings.

On the other hand, my choices ended up ranging from young Lubbock thespians to very loud rockers who already have been honored in the Rock and Roll Hall of Fame. We do love variety, right?

Plus there might be two hours on Saturday when Jayhawks tell themselves, “We’re not in Kansas anymore.”

Lubbock’s art trail, attracting thousands on a monthly basis, is one of the city’s artistic jewels: an opportunity for those who appreciate visual art on any and all levels to observe its creation by local and area artists.

The art is displayed at more than a dozen separate galleries and venues. Visitors either can provide their own transportation or take advantage of the five art trail trolleys.

The trolleys will leave from different locations, but each trolley will make the same stops. Trolleys depart at 6:15 p.m. and return at approximately 9:30 p.m.

Visitors will want to make their own arrangements to check out the art at the prior 10 venues.

Venues showcasing art and artists on Friday include:

Dick Vitale will be there. Why shouldn’t you?

This is the final regular season game of the 2019-2020 season for the Texas Tech Red Raiders.

And talk about drama: Coach Chris Beard’s Red Raiders will end their season at 1 p.m. Saturday playing against the No. 1-ranked team in the country, the Kansas Jayhawks, in a nationally televised game at the United Supermarkets Arena, 1701 Indiana Ave. in Lubbock.

Check website www.texastech.com for tickets in advance, or arrive early and try the box office.

This may not be the season many Tech fans expected last fall, but even losses against top-ranked teams  thus far have been by exciting, razor-thin margins.

So do not count out Texas Tech on Saturday.

After surprising the Baylor Bears in Waco on Monday with a trip to overtime, do not discount the power of Beard’s team playing for post-season momentum, propelled by the power of a full, and loud, USA.

This is the traditional “Senior Night” game – OK, Senior Day – and the last time fans will see T.J. Holyfield and Chris Clarke play on Tech’s home court. (Some feel it might be the same for Jahmi’us Ramsey … that is, if he’s one-and-done at Tech and thinking more about the NBA draft. He has made no such claim.)

Vitale again will be able to rave about the top-ranked Jayhawks. What a great opportunity to show him how Tech’s home crowd can propel the Red Raiders to an upset win!

Oh, there’s more. Tech fans have loved linking arms and swaying to the left and right all season; the entire arena becoming loud during such “swag surfing,” which has NOT been limited to the student section. On Saturday, look for Tech to bring to Lubbock and the USA the band Fast Life Yungstaz, original composers of the music for “Swag Surfing.”

Still to come: The Big 12 Tournament – and the NCAA Tournament.

But Saturday is the final game in Lubbock.

At this point, experts predict Tech will be an eight seed in the NCAA Tournament.

But a victory vs. Kansas on national TV on Saturday at the USA, followed by a strong showing in the conference tournament could change that.

Those who complain about a lack of rock on stage at the USA – and their numbers have grown – will smile at least for a night when David Lee Roth, formerly of Van Halen, opens for KISS at 7:30 p.m. Tuesday at the United Supermarkets Arena, 1701 Indiana Ave.

The Lubbock gig is part of KISS’ ongoing End Of The Road world tour.

Some members departed until a 1996 reunion.

In September 2018, after 45 years of recording and touring, KISS announced its End Of The Road world tour.

Looking back, it is somewhat humorous now. This band – protested and picketed by those who were convinced decades ago that the moniker stood for Knights In Satan’s Service – now is saluted as one of history’s greatest metal-rock bands.

One of the best-selling groups of all time, KISS sold more than 75 million records worldwide. Original members are in the Rock and Roll Hall of Fame.

I interviewed Simmons and Stanley in the late 1970s, and I covered Lubbock performances by KISS during my years with the Lubbock Avalanche-Journal. Those years ran the gamut from seeing frightened parents, to chatting with moms accompanying their excited young sons, each of the boys’ faces painted, to the KISS concert.

Band members, by the way, always struck me as devoted rock ’n’ rollers and, just as obviously, good businessmen.

The KISS Army has followed KISS to appearances at Super Bowl XXXIII, the 2002 Winter Olympics in Salt Lake City and a 2005 Rockin’ the Corps concert dedicated to American troops in Iraq and Afghanistan.

Rolling Stone magazine checked out the current tour’s new leg, starting in early February. The magazine reported Roth played a truncated version of “Panama,” calling it “one of seven Van Halen classics in (Roth’s) eight-song set. The lone solo cut was his 1987 hit ‘Just Like Paradise.’”

The Rolling Stone reporter wrote, “Kiss stuck mostly to their hits, as well, and did not vary the set much from last year.

“This tour is Roth’s first time playing big venues since Van Halen last hit the road in 2015. The Van Halen brothers virtually vanished from public life since that tour wrapped. That situation prompted Roth to hit the road for his first solo tour since he rejoined the group in 2007.”

The replacements with KISS have been described as just that. Nevertheless, Tuesday marks an opportunity to hear those great KISS songs again – played, with perhaps the exception of a “Beth” encore, at ear-splitting levels.

Roth being in the house just may make this show a bit more historic for those who love rock. 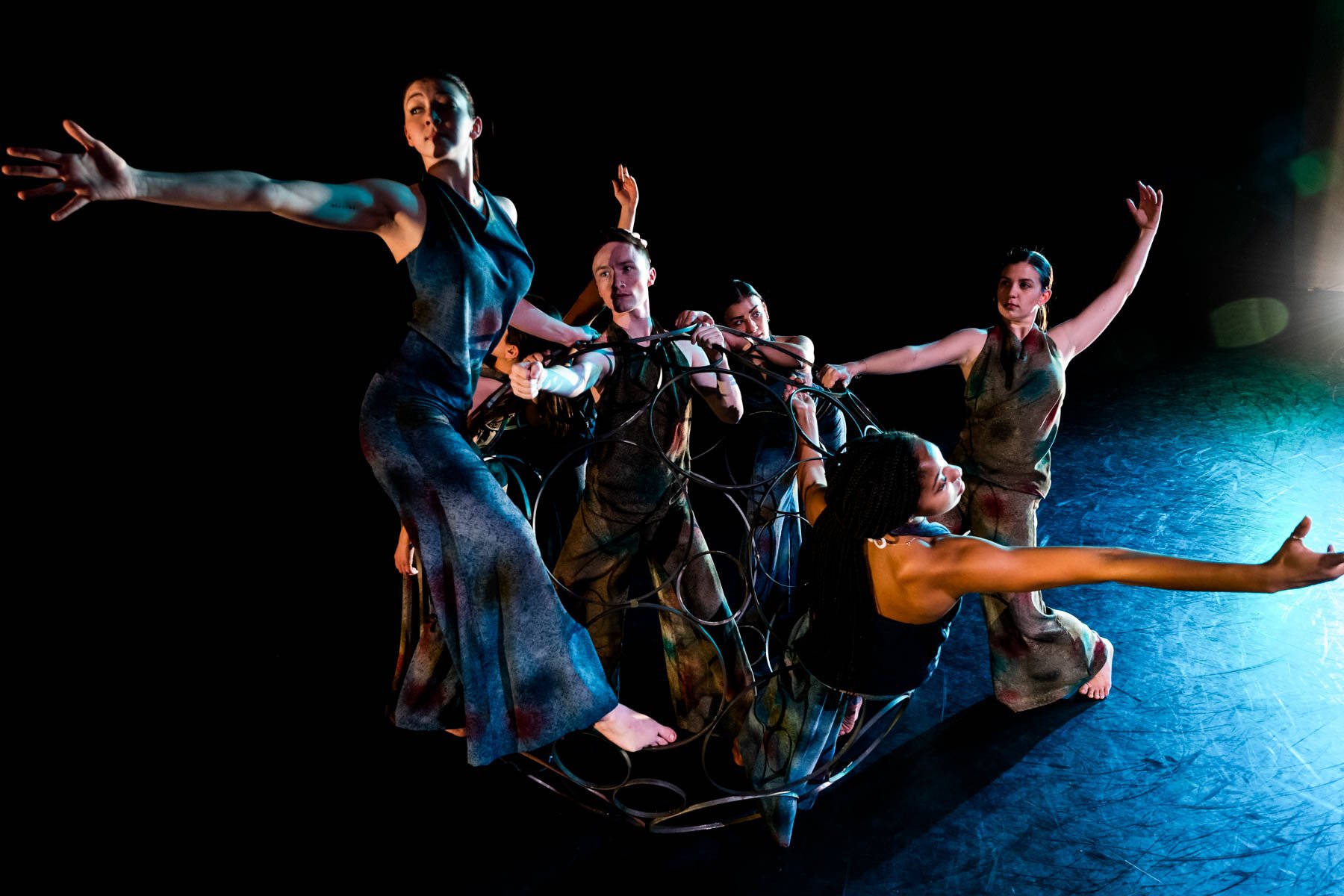 DanceTech, an annual Texas Tech School of Theatre and Dance production, will be staged at 7:30 p.m. Friday and Saturday at the school’s Black Box Theatre on campus at 2812 18th St.

Jones is founder and artistic director of Movement Migration and associate professor of dance at the University of North Carolina. She visited Tech in January for a short residency, at which time she also  introduced six pieces for DanceTech.

A choreographer and dancer from New York, Jones danced with the Martha Graham Dance Company and the Metropolitan Opera Ballet. She served as a principal dancer in the national tour of the musical “The King and I.”

In addition, Kyla Olson, an assistant professor of dance serving as Dance Tech artistic director, mentioned the program will spotlight music by violinist Clara Zahler and a sculpture by visual artist Jonathan Whitfill. Olson added, “It reflects the collaborative and interdisciplinary nature of this production and our school.”

General admission seating is $15 for the general public and $5 for students with valid IDs. For additional ticket information, call 742-3603.

The Trials of Robin Hood, LCT

The varsity troupe of actors at Lubbock Community Theatre continue to rehearse the comic production “Clue,” opening later this month.

But the LCT stage will not be dark this weekend, thanks to a new work acted by gifted thespians within the LCT Youth Guild – specifically “The Trials of Robin Hood,” staged at 7:30 p.m. Friday and Saturday and also at 2:30 p.m. on both Saturday and Sunday.

The play is directed by Nicole Caddell and performed at the LCT Playhouse, 4230 Boston Ave.

Reserved seats are $15 for the general public and $10 for children age 12 and younger. Tickets can be purchased in advance online at website lubbockcommunitytheatre.org or by calling 749-2416. It is likely tickets also will be available at the box office at showtime.

In addition, LCT requests a donation of new or gently used suitcases and backpacks at the door. All will be donated to the Texas Boys Ranch.

The play: Upon his return from the Crusades, King Richard is forced to figure out what happened to his kingdom during his absence. Is the outlaw Robin Hood a hero, a lovelorn sap – or just goofy?

Told from the perspectives of Robin Hood, Maid Marian and the Sheriff of Nottingham, the comedy tries to tell all three stories, leaving it up to audiences to choose which they prefer and thus determine the proper ending.

The identity of the actor portraying the Sheriff of Nottingham could not be found in press information sent to media.