We start with Saturday morning breakfast, then a couple of selections at a Cinemark multiplex and   rock memories of one of our favorite albums.

Tickets are $7 in advance  and the price is $9 on Saturday. Children age 3 and younger can eat for free.

Advance tickets are available by calling the Lions Club office at 764-4789. They also can be purchased online at web site https://lubbocklions.org/pancake-festival/  or https://www.facebook.com/events/2260619400920844/

The Lions Club Pancake Festival reportedly is the largest in the world that supports local charities. More than two-dozen local charities will benefit.

The club holds the world record for most pancakes served in an eight-hour period by a non-profit organization. The Lubbock Lions Club raised $115,437 last year.

Lubbock’s appreciation of dance has grown through the decades, apparent via its four successful dance companies – well, five if one also considers the vast improvements seen via audience support, students and faculty within Texas Tech’s School of Theatre and Dance.

Nevertheless, Fathom Events has been embraced by Lubbock viewers, who appreciate Fathom making so many events available on a movie screen: concerts, one-of-a kind theatrical events, classic films and also a full season of operas from the Metropolitan Opera in New York City.

Founded in 1776, the Bolshoi Ballet company is among the world’s oldest – although it took until the early 20th century for the Bolshoi and Mariinsky Ballet in Saint Petersburg, Russia, to rank among the foremost ballet companies in the world.

Still, the Bolshoi remains a spearhead of Russian culture as one of the largest and most celebrated ballet companies.

For the eighth consecutive season, the Bolshoi Ballet opens its doors to viewers across the world. Those who appreciate dance can view Bolshoi performances on the wide screen – including Cinemark’s Movies 16 in Lubbock – on more than 1,700 movie theater screens in 650 countries.

Looking ahead, a Bolshoi performance of romantic ballet “Romeo and Juliet” arrives in Lubbock on Feb. 29.

Tickets for the general public are $17. There are no reserved seats. Tickets are available in advance at the theater’s box office.

One of the most mesmerizing of classical ballets, music was composed by Pyotr Ilyich Tchaikovsky, his first ballet score. “Swan Lake” depicts a tragic love between Princess Odette, transformed into a swan by evil sorcerer Von Rothbart, and Prince Siegfried.

Prince Siegfried is unaware the lovely princess with whom he falls in love, Odette, is doomed to spend her days as a swan swimming on a lake of tears. She is only able to take on her beautiful human form during the night time.

But Odette can experience the freedom she desires. Siegfried’s love can break the sorcerer’s spell, which presently preserves her as a swan. However, while Odette embodies beauty and purity as a swan, she cannot fulfill them as a woman.

The ballet debuted in 1877 at Moscow’s Bolshoi Theater, but was not immediately well received.

In 1895, Marius Petipa and Lev Ivanov reworked the choreography for a St. Petersburg performance. This rendition remains the most popular version.

“Swan Lake” made its American debut with a 1940 performance by the San Francisco Ballet.

The following link takes readers to a teaser for the production being screened Sunday: https://www.fathomevents.com/events/bolshoi1920-swan-lake?date=2020-02-23 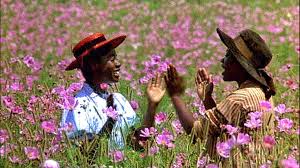 ‘The Color Purple’ at Movies 16

A bit of cinematic history: “Gone with the Wind,” “Titanic” and “La La Land” are the only movies to receive as many as 14 Academy Award nominations.

At the recent Academy Awards, “The Irishman,” directed by Martin Scorsese but produced by Netflix, was honored with 10 Academy Award nominations. Yet it left completely empty-handed. It was not a record.

It took a long time for older voters at the Academy Awards to show respect for Steven Spielberg in the form of an Oscar for Best Picture – and I’m not just referring to the Weinstein-flavored victory for “Shakespeare in Love” over Spielberg’s “Saving Private Ryan.”

You’ll recall that such popular films as “Jaws,” “Raiders of the Lost Ark” and “E.T. The Extraterrestrial” were among those not named Best Picture.

The biggest Spielberg snub, by far, arrived in 1985 – or rather in 1986, when films produced in 1985 were honored. He directed the film adaptation of “The Color Purple,” for which novelist Alice Walker won the 1983 Pulitzer Prize for fiction (the first black woman to do so) and the National Book Award for Fiction.

Nominated for 11 Academy Awards, “The Color Purple” went home with no statues, totally empty-handed, overlooked in every category in which it had been nominated.

It tied an Oscar record, matching respected director Herb Ross’ brilliant 1977 film “The Turning Point,” which also had been nominated for 11 Oscars and won none.

“The Color Purple” was competing against “Kiss of the Spider Woman,” “Out of Africa,” “Prizzi’s Honor” and “Witness.” Spielberg’s film would lose that night to “Out of Africa.”

Steven Spielberg’s “The Color Purple” may have been chosen for its 1 p.m. screening on Sunday at Cinemark’s Movies 16 to represent Black History Month.

Regular admission prices are in effect Sunday: $8.75 for the general public between ages 12 and 61; $5.25 for seniors age 62 and older, children age 11 and younger, college students with valid ID and military members with valid ID. Prices do not include tax.

Whoopi Goldberg was nominated as Best Actress for “The Color Purple.” She lost the Oscar to Geraldine Page for “The Trip to Bountiful.”

Page had been nominated seven times previously without winning and, sadly, would pass away the following year.

Set in rural Georgia, the story focuses on the life of African-American women in the Southern United States in the 1930s. Issues addressed include the low position black women held in American culture.

Goldberg portrays Celie, a poor, uneducated black teen who writes letters to God because her father Alphonso beats and rapes her.

With or without Oscars to its credit, “The Color Purple” is a landmark motion picture which will be shown by Lubbock’s Cinemark only one time Sunday, and will not be repeated by Movies 16.

The opera will be performed in German, with English supertitles. The German libretto is by Emanuel Schikaneder.

The orchestra will be conducted by Imre Pallo.

General admission seating is in effect. Tickets are $20 for the general public and can be purchased at all Select-A-Seat outlets. Texas Tech students are admitted free with a valid ID.

Set in a mythical land between the sun and the moon, three women in the service of the Queen of the Night save Prince Tamino from a serpent.

When they leave to inform the queen, bird catcher Papageno appears.

He boasts to Tamino it was he who killed the creature.

The women return to give Tamino a portrait of the queen’s daughter, Pamina, whom they say is enslaved by the evil Sarastro. Tamino falls in love with the picture of the girl.

The queen appears in a burst of thunder, tells Tamino about the loss of her daughter and orders a rescue. The woman gives a magic flute to Tamino to ensure safety during the journey. She also summons three spirits to guide him.

First separately, and then together, Tamino and Pamina undergo several trials, which end in triumph.

Thinking back … I’m a bit curious whether any other (predominantly male) music lovers ever harbored crush fantasies on Stevie Nicks while watching her perform in concert – especially that one time in the mid-to-late-‘70s when seated (yeah, right) very near the stage at the Tarrant County Convention Center in Fort Worth.

All those veils – and that voice, singing “Dreams” – might have had something to do with it.

Seriously, it will not be the real Fleetwood Mac on the Cactus stage Sunday night – but the international tribute band for Fleetwood Mac, called Rumours, is rumored to be exceptional. And maybe as close as one can get to the real thing.

While my first Fleetwood Mac live concert provided harder rockin’ fun, I later was lucky to land super seats when the band began touring in support of its 1977 “Rumours” album – and that concert of soft pop and rock likely was the best show I saw that year.

Mind you, I never have seen the international Fleetwood Mac tribute touring act Rumours, but this band has earned some rave reviews since hooking up eight years ago.

Tickets are available in advance online at https://www.eventbrite.com/e/rumours-the-ultimate-fleetwood-mac-tribute-show-tickets-86699850587.

Reserved seats are $25 on the floor, and $20 for traditional balcony seating, with those limited seats in the balcony box $50. Mind you, there is no additional charge for any concessions if seated in the balcony box, provided you don’t forget to flash your ticket stub before ordering.

Call the Cactus at 762-3233. More information is available at online sites www.cactustheater.com and https://tinyurl.com/yfypmx4z.

Rumours was formed in the summer of 2012 in Los Angeles. Shortly after the band Rumours finished a residency at the popular Roxy in LA, members were invited to perform on AXS-TV’s “World’s Greatest Tribute Bands.”

The Rumours show recreates the band between years 1975 and 1987.