Cameron West had this idea in one of the notebooks he keeps — bringing back the West Texas Diner and honoring his famous grandpa.

When Dirk’s opens soon on 13th Street, just east of Q Avenue … he’ll bring both together.

“The old diners seem to be dying out, so I figured it was time for one to come back and do a modern play on it with a little more health-conscious, locally sourced items and some gluten-free options,” he said.

“My goal is to have a good ‘ol cowboy having a chicken fried steak next to a hipster having a gluten-free lunch and everybody gets along,” said Cameron.

And on the walls will be cartoons from his grandpa Dirk West — former Lubbock mayor and cartoonist best known for his Texas Tech cartoons in the Avalanche-Journal that sparked Raider Red and poked fun at Tech’s old Southwest Conference foes, especially Texas A&M.

Dirk’s will join The West Table that Cameron opened five years ago.

“A lot of chefs started with an upscale restaurant to brand themselves as a place with quality food. I saw a lot of them transition into more casual food. So it’s the next progression. And tying it in with the West Texas diners, my grandfather, the Southwest Conference and all the fun things Lubbock has just kind of made sense,” he said. 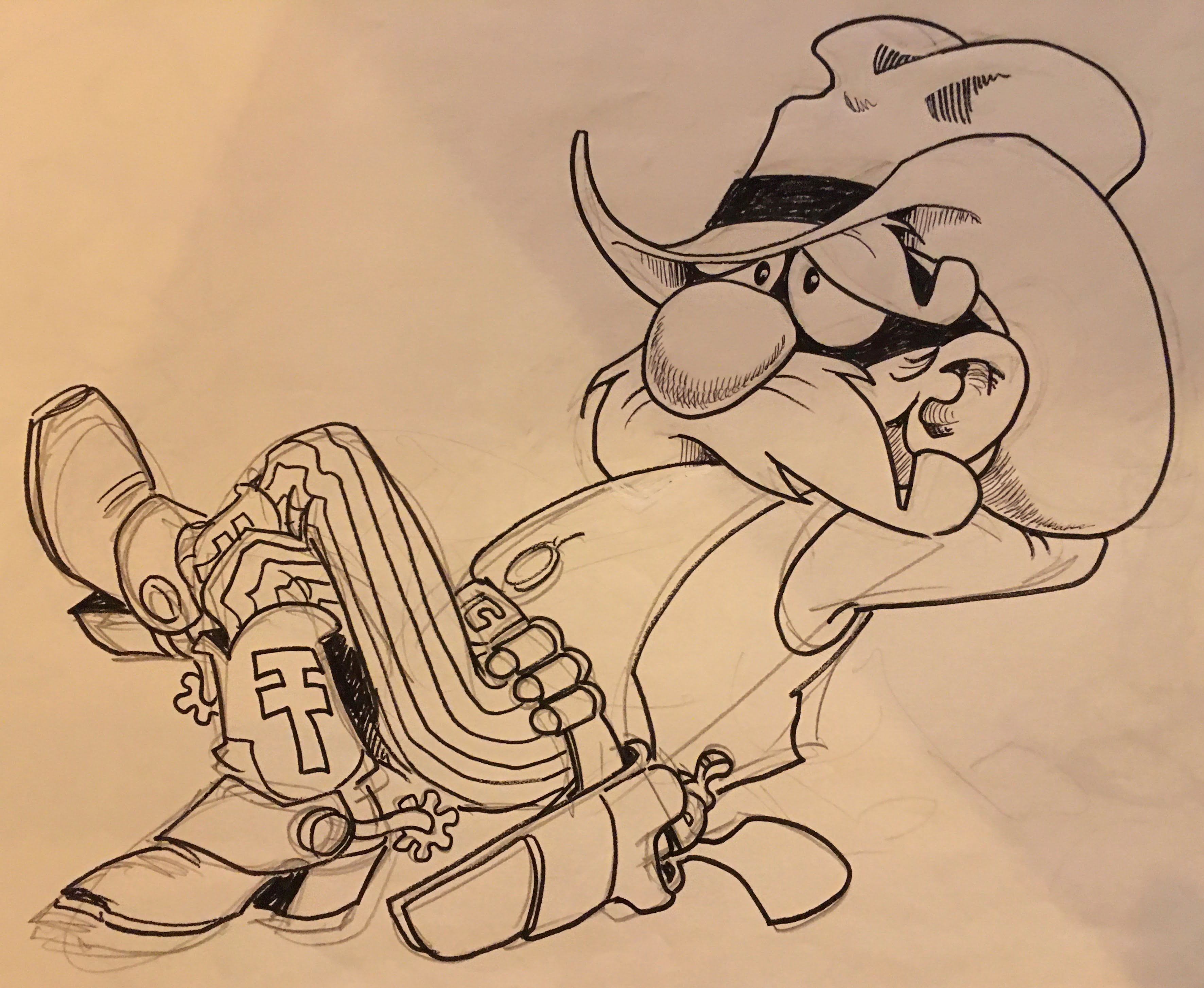 My crash course in Dirk West

I got a crash course in Dirk West (his drawing of “Red” above) when I became editor of the Avalanche-Journal in 2006 because of his historic connection to the newspaper.

Dirk passed away in 1996, the year Tech joined the Big 12 Conference, but his cartoons have lived on.

We enjoyed publishing some of his best when the A-J did weekly pages for 13 months celebrating the city’s centennial more than a decade ago.

And then-publisher Steve Beasley used many of the ‘toons in a cool history of the newspaper that “wrapped” two long hallway walls when the building’s inside was redesigned.

When I interviewed Cameron for this piece it was January and Dirk’s was going to open in March.

We all know why the timetable was pushed back.

I kept in touch with Cameron by occasional text and once or twice while enjoying a Smoke and Mirrors cocktail at The West Table. Trust me on this … especially if you like scotch. 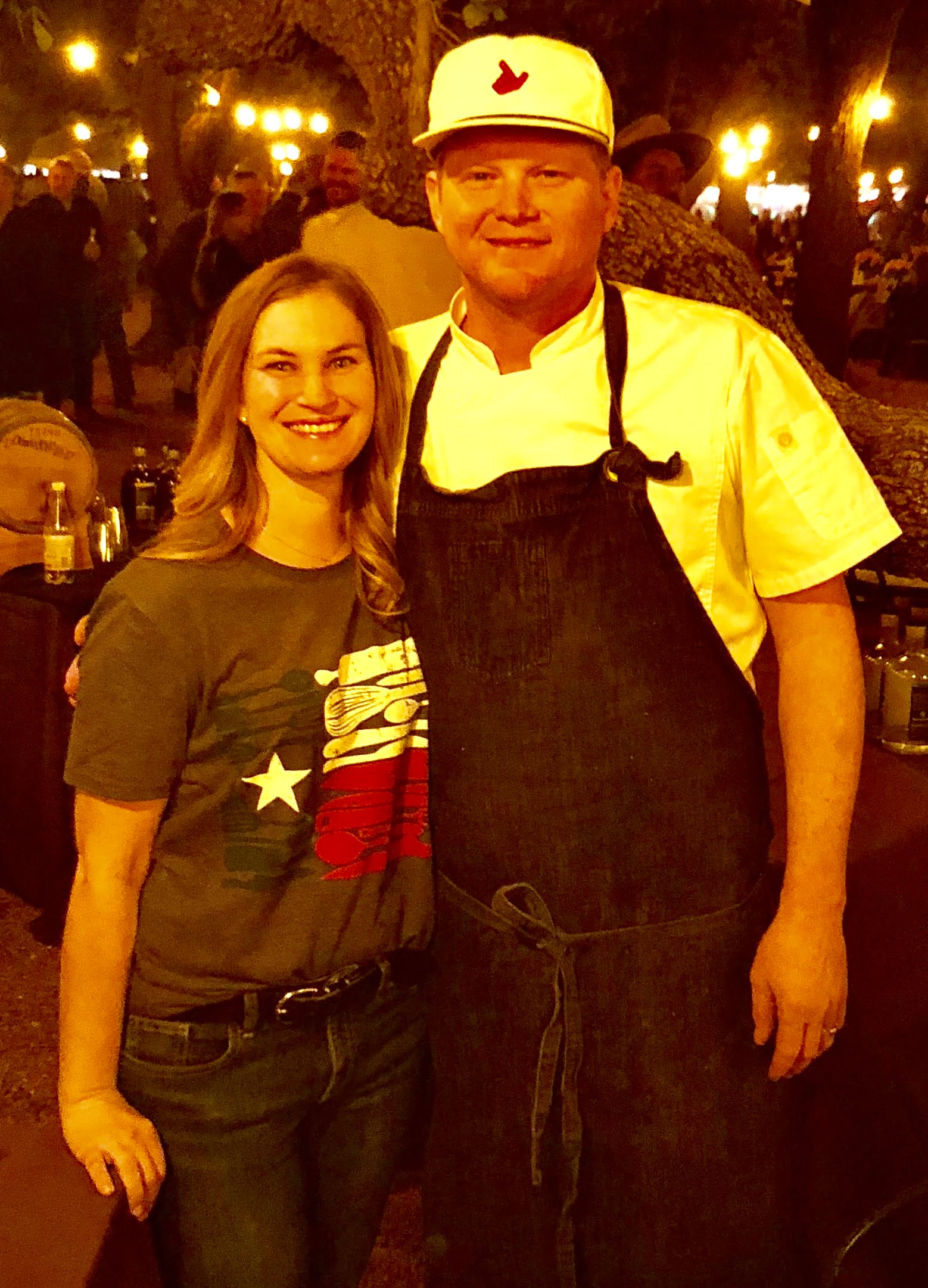 Cameron grew up in Lubbock, went to Coronado and Texas Tech before culinary school in California’s Napa Valley. After jobs in Florida and the Metroplex he came home to open his restaurant.

“The goal was to always do this. I thought it would be in the Metroplex, but once you start having kids, the cost of living — I convinced my wife and we came home. I’ve always loved Lubbock,” he said.

Cameron’s wife Rachel was from Fort Worth, but went to Tech. (Rachel and Cameron seen in photo above provided by Cameron).

“So she knew what she was getting into. I think we were more worried about if there were going to be young people our age to have as friends and it’s been awesome. There’s a resurgence of younger people staying in Lubbock,” said Cameron.

“I think Lubbock’s always had those ‘see and be seen’ places,” he said, mentioning Cafe J as filling that niche long before the more recent additions to Lubbock’s dining scene.

As more professionals come to Texas Tech, our medical businesses and a growing technology sector — upscale restaurants have been popular.

“I think my timing was right,” said Cameron, adding differentiating himself by choosing to go into the bottom of the Pioneer Hotel downtown was a smart move.

“Howard Thrash called it a destination location. He was one of the first guys I talked to when I moved back to town,” said Cameron.

His investment in downtown is appreciated.

“People are very thankful, it’s been endearing. I’ve seen so many downtowns do this and didn’t see why Lubbock couldn’t,” he said.

But when he opened The West Table five years ago, it was, as he called it, a “scary movie.”

“We were dumb enough to take a swing at it and it’s worked. It’s not a scary movie anymore,” said Cameron.

After lunch, Dirk’s will offer an “oyster bar appetizer menu” starting at 4 p.m.

I told Cameron, “Oysters are not West Texas.”

“They’re going to be Gulf oysters,” he shot back.

That led to a discussion about food sources and how it’s increasingly important to diners.

“The idea is to source all seafood from the Gulf, chicken and beef from Texas,” he said.

“It’s a constant question — where are the proteins from? Are they raised here locally?” said Cameron. “Since food has become so popular on TV with all the cooking shows, people have started asking more questions.”

“And if I have something locally sourced, I sell it faster than anything else,” he added.

Cameron knows chicken fried steak is a West Texas diner staple and if he forgot, he was recently reminded at The West Table.

“I did chicken fried elk as a joke and it became one of my number-one sellers, I did it with tater tots and it got out of hand quickly. So the demand is there,” he said.

As is the demand for gluten-free.

“I’ve got a lot of friends who say they’d love to eat with me every day but would weigh 300 pounds. So they’ve said ‘if you put rotisserie chicken there, I’ll eat three, four times a week,’” he said.

“I can’t eat fried chicken every day, so I started thinking. Also, one of my partners has some gluten issues. And if you take care of those people, they’ll come back,” he said.

With South Plains College taking the old city hall right across the street, the Cotton Court Hotel going up and other downtown growth — Cameron again hopes his timing is right.

“I think Q is turning into a pretty good street,” he said.

Cameron lined up some of his grandpa’s extensive artwork to make copies, then let his wife Rachel take it from there.

“She’s the designer of the group,” said Cameron.

Unfortunately, his grandmother – Mary Ruth West – passed away in April at 89 and didn’t get to see Dirk’s open.

But she knew about it.

“She loved the idea of Dirk’s. I think she really enjoyed that a new generation was discovering who he was,” he said. 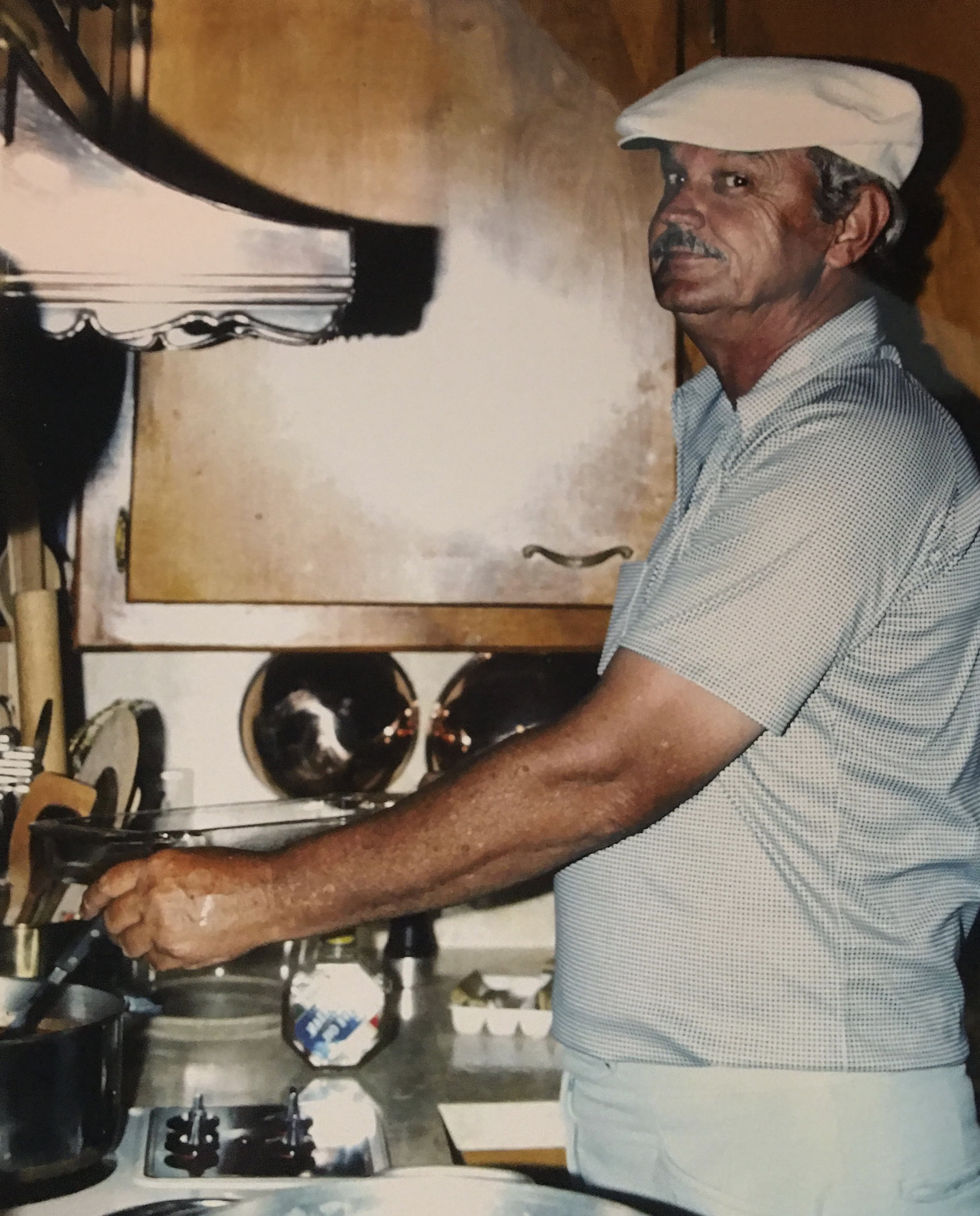 ‘He was a character’

Cameron was in 7th grade when Dirk (above, in photo Cameron shared with us) passed away.

“I was old enough to know the man and wish I had more time with him,” he said.

“He was a character. Every birthday card was hand drawn. Toward the end of his life he was into carvings and doing all the sculptures. So I remember sitting on his lap — doing my carving — while he was carving, smoking four packs of cigarettes a day and telling jokes,” said Cameron.

“I remember him cooking a lot. He liked to make chili,” said Cameron.

“It freaked everybody out,” he said.

He still hears about his grandpa from those who knew him.

“They tell me how they loved my grandpa or a funny story or how they used to play golf with him, sit up at the country club or whatever their connection was. That’s been a nice connection to an older generation. We have that in common. It’s always fun to watch that generation or my parent’s generation pulling out the drawings and teaching their kids about it. So that’s another reason why I wanted to do Dirk’s is watching the number of people come in and see these these cartoons,” he said.

For younger people, he said, they may not know who Dirk was, but they’ve seen the artwork.

“And I think everything comes back, so I think it’s a good time for some of his ‘70s and ‘80s stuff to make a comeback,” said Cameron.

And if you’re been to The West Table, you’ve seen the Southwest Conference mascot drawings right outside the entrance.